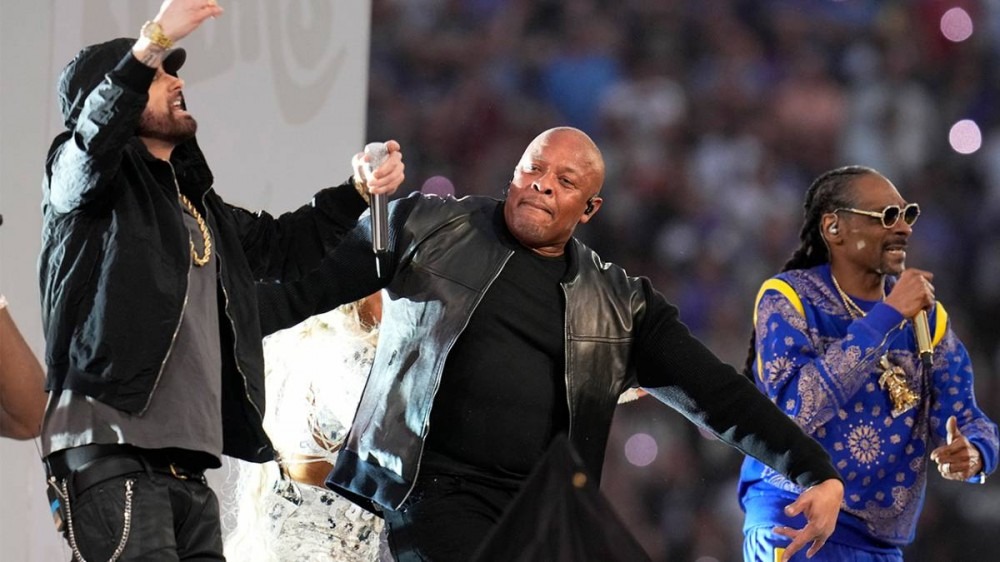 Eminem and Snoop Dogg were beefing up until Dr. Dre suffered a near-fatal brain aneurysm in January 2021.

Appearing on the latest episode of his longtime manager Paul Rosenberg’s Paul Pod: Curtain Call 2 podcast on Wednesday (September 14), Marshall Mathers opened up about the origin of his feud with Snoop and how it was ultimately buried.

Em explained that their problems started when Snoop appeared on “Bitch Please II” from 2000’s The Marshall Mathers LP and hoped to secure a feature from Slim Shady in return, which Rosenberg didn’t immediately agree to. But ultimately, it was Dr. Dre’s ill health that brought them back together more than two decades later.

“Me and Snoop had our little issue and when that thing happened with Dre, the brain aneurysm thing,” he recalled. “We were like, ‘Bro, this is stupid. This is stupid as hell to be feuding right now.’ I don’t remember if I called him or he called me, but we talked it out.

“I think that there was a miscommunication at the time in regards to him being on my album, The Marshall Mathers LP – ‘Bitch Please II.’ I think he had wanted to do something with me and maybe gave you [Rosenberg] the idea and you said something to the effect of, ‘Well, let’s hear what the song is first.’ He said the way that he took it was kinda like that I didn’t fuck with him.”

While reconnecting, Eminem told Snoop Dogg how much of an impact his debut album had on him, while throwing out the idea of collaborating on “From the D 2 the LBC.”

“I’m like, ‘Bro, Doggstyle changed my life,’” he said. “I think that whole thing was just us getting our signals crossed somehow. Because for him to take it, I was like, ‘Bro, how could I not fuck with you?’ We talked it out and realized how stupid it was to even be feuding at all in the first place. My olive branch was bringing Snoop [‘From the D 2 the LBC’], plus I knew he’d kill that beat.”

The pair’s beef reached public consciousness in July 2020 when Snoop Dogg appeared on The Breakfast Club and said Eminem doesn’t belong in the Top 10 rappers of all time.

This prompted Em to respond on “Zeus” from his Music to Be Murdered By album: “As far as squashing beef I’m used to people knocking me / But just not in my camp / And diplomatic as I’m tryin’ to be / Last thing I need is Snoop doggin’ me / Man, Dogg, you was like a damn god to me / Meh, not really (haha) / I had dog backwards.”

“Everything he said was fine, up to a point,” Eminem said during a Shade 45 interview in December 2020. “Him saying Dre made the best version of me, absolutely, why would I have a problem with that? … It was the last statement where he said, ‘Far as music I can live without, I can live without that shit.’ Now you’re being disrespectful. It just caught me off-guard.”

“I know how to call Marshall and say, ‘Man, I apologize. I was wrong, bro. Do you forgive me?’” he said at the time. “You got to understand we really love each other. So we don’t want the public to put a spin on something that’s not even that serious… And we truly respect each other. So we wanted to get an understanding behind closed doors. We’re brothers, man.”

Eminem and Snoop Dogg have linked up a number of times since rekindling their relationship. They performed together as part of the Super Bowl LVI Halftime Show in February alongside Dr. Dre, Kendrick Lamar, 50 Cent and Mary J. Blige, before collaborating on “From the D 2 the LBC” in June and performing the song at the 2022 MTV VMAs. The pair were also spotted in the studio with Dre in August.