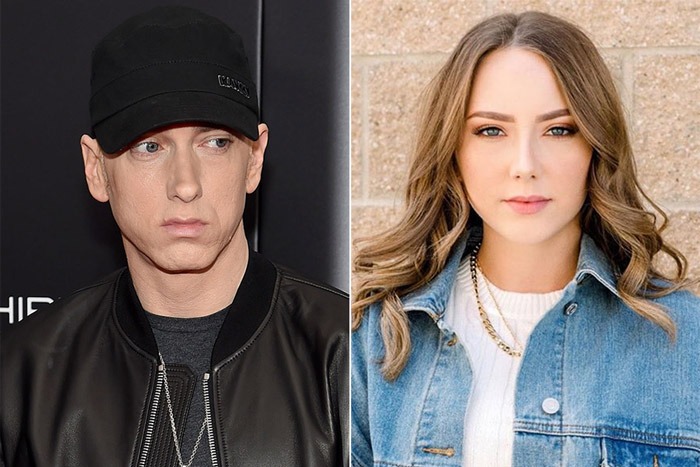 Eminem is a proud father.

The Detroit rapper has shied away from speaking about his family life, but he couldn’t help but gush over his daughter. In a recent interview with Mike Tyson’s “Hotboxin’” podcast, Em opened up about Hailie Mathers, whom he shares with ex-wife Kim Scott.

“No babies, she has a boyfriend, but she’s doing good,” said Eminem ( Page Six). “She’s made me proud for sure. She’s graduated from college.”

Hailie, who graduated from Michigan State University with a degree in psychology, remains close with her dad. During a June 2018 interview with Daily Mail, the 24-year-old revealed that she lives in her own home near her family in Detroit.

“Of course, we are very close,” said Hailee of their relationship.

Hailee has become a social media influencer, with nearly 2 million followers on Instagram. She is currently in a relationship with longtime boyfriend Evan McClintock, who she met in college.

During his interview with the retired boxing champ, Eminem also opened up about raising his two nieces. “I have a niece that I have helped raise, too, that’s pretty much like a daughter to me, and she is 26,” said the “Godzilla” MC, “and I have a younger one that’s 17 now.”

Despite all his achievements, nothing makes him prouder than his family. “So when I think about my accomplishments, that’s probably the thing I’m the most proud of is being able to raise kids.”

The devoted dad is making sure his kids stay grounded despite money and fame. “It’s important to keep your kids grounded when they’re in a situation like I have, it’s very important,” he added. “People also think too that money just buys happiness, [but] that absolutely is not the truth. You’ve got to be right inside, otherwise none of this shit means nothing.”