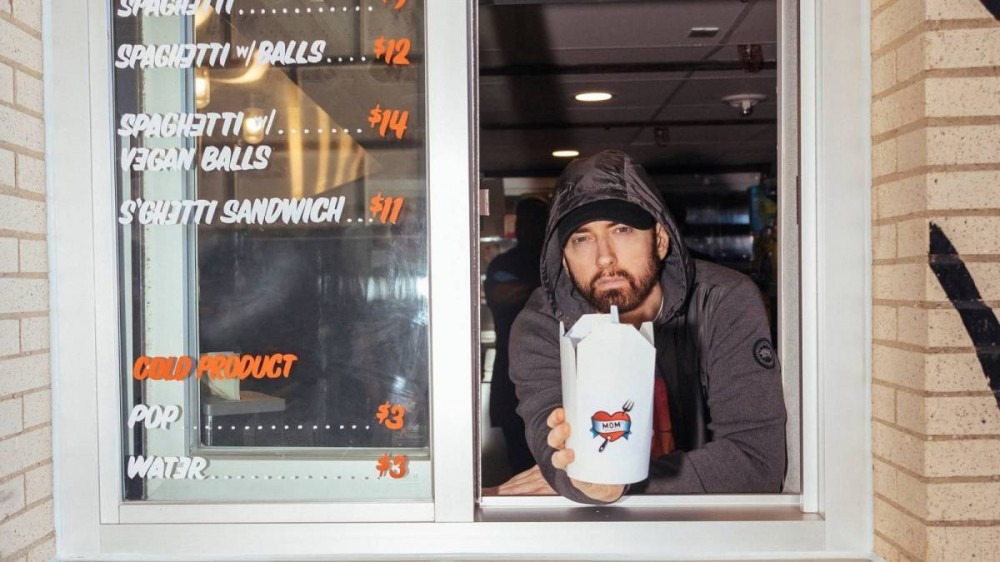 Detroit, MI – Eminem fans were met with an unexpected surprise when Slim Shady himself showed up at the grand opening of Mom’s Spaghetti in Detroit on Wednesday (September 29).

Not only did Eminem make an appearance, he also worked the drive-thru of his new restaurant, greeting patrons with a middle finger.

Wearing a hoodie and still rocking his grown-man beard, Eminem served up $9 cartons of spaghetti (or $12 with meatballs), $11 “s’ghetti” sandwiches and $14 cartons of spaghetti with vegan meatballs to shocked fans who likely weren’t expecting to see the diamond-selling rapper at the drive-thru window.

Eminem serving spaghetti during the grand opening of Mom's Spaghetti in Detroit 🍝 pic.twitter.com/JHGFm16Cyz

Then in 2020, Eminem revived the idea in an effort to feed frontline workers at several local hospitals as the COVID-19 pandemic began its rampage.

Slim Shady announced a brick and mortar location of Mom’s Spaghetti would become a reality earlier this month. In addition to the food, patrons will be able to check out The Trailer, a Shady merch store located inside of the building.

“We’ve had a lot of fun putting this project together with the folks at Union Joints, and the response from fans has been overwhelmingly positive,” Rosenberg said in a statement. “The previous pop-ups were really a test for us to determine whether there was enthusiasm for a regularly-occurring Mom’s Spaghetti spot that would be open all year long.

“We are really pleased to announce the arrival of the walk-up restaurant and adjacent upstairs store, called The Trailer, where fans can experience a uniquely-curated environment and obtain merch and other items from Eminem and his new pasta operation.”