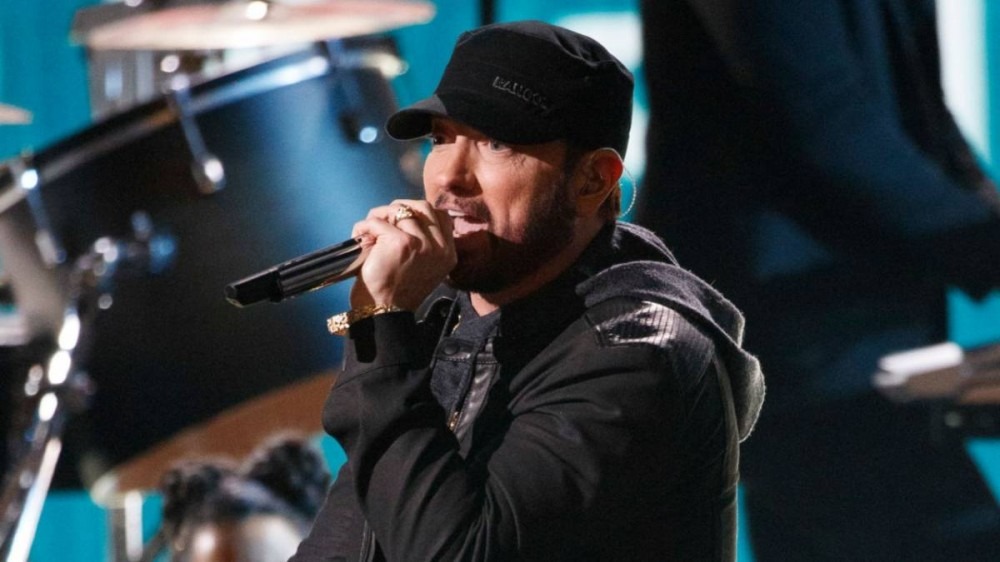 Eminem is keeping his creative juices flowing in support of the new Marvel film Venom: Let There Be Carnage. After forming an alliance with Polo G, Mozzy and Skylar Grey on “Last One Standing” last week, Slim Shady unleashes another song from the movie’s accompanying soundtrack.

Taking it back to the old-school — an era he grew up in and clearly still reveres to this day — Eminem has released a surprise remix of his 2018 track “Venom” as the B-side to “Last One Standing.” The original appeared on the soundtrack to the first Tom Hardy film, as well as Em’s platinum-selling album Kamikaze.

“Like we used to do- on the B side goes the REMIX,” he tweeted on Tuesday (October 5), along with a link to the new tune. “Shout to @dagotthatdope1.”

While Eminem’s original web of rhymes remain in tact, this new version features a different beat and slightly edited vocal sections. The synth-soaked production from the first iteration has been stripped back to put more focus on the floor-shaking percussion, yet the track remains a high-octane listen all the same.

Behind the boards, the original “Venom” producer, Luis Resto, is replaced with D.A. Got That Dope, who also worked on Eminem’s Music To Be Murdered By, as well as on songs with Kodak Black, Megan Thee Stallion and Chris Brown.

Eminem isn’t the only rapper to release a “Venom” remix for Venom: Let There Be Carnage. London-bred lyricist Little Simz has also reimagined her respective “Venom” song, which was originally released on her 2019 album GREY AREA and also appeared on Drake’s soundtrack for the British Netflix series Top Boy.

According to Venom: Let There Be Carnage director Andy Serkis, it was the movie’s leading man, Tom Hardy, who reached out to Simz to make the remix happen.

“She actually had made a song, unbeknownst to her, called ‘Venom’ that connected very much with the first movie,” Serkis told Uproxx. “And so Tom got in touch with her and that song became sort of the focus [of the scene].”

Venom: Let There Be Carnage is already making a splash at the box office since its release last Friday (October 1). The film grossed $90.1 million domestically in its opening weekend, making it the biggest movie release since the start of the COVID-19 pandemic in March 2020.

Meanwhile, there are currently rumors circulating that Eminem’s new album is on the way — and it could be a third installment in his iconic Marshall Mathers LP series.