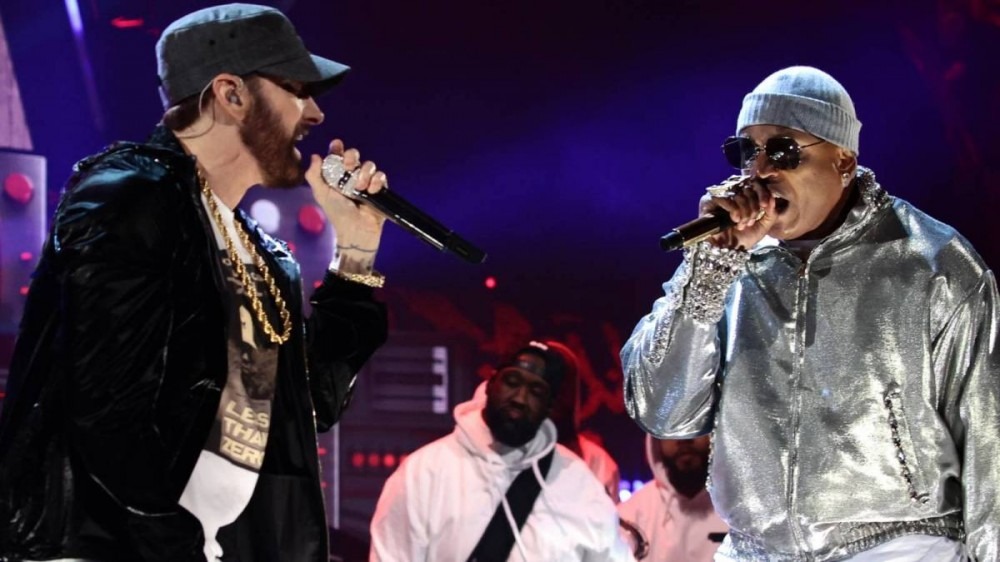 Cleveland, OH – Hip Hop was in the building on Saturday (October 30) as the Rock and Roll Hall of Fame induction ceremony got underway at Cleveland’s Rocket Mortgage FieldHouse. Not only was JAY-Z inducted into the Rock Hall, but LL COOL J also secured a prestigious spot after six nominations. During the Def Jam juggernaut’s performance, he was joined by Eminem to perform “Rock The Bells” from LL COOL J’s 1985  debut, Radio.

Despite being one of the most successful musical acts of all time, Eminem couldn’t help but get a little starstruck. After all, Slim Shady has repeatedly made it clear how much he admires and respects his rap predecessors. On Tuesday (November 2), Eminem shared a tweet plugging the televised version of the induction ceremony and expressed his gratitude for the opportunity to rap alongside the Hip Hop pioneer.

‘Cause there’s a 10 to 1 chance that you might get smacked!” he wrote alongside a photo of their performance. “ROCK THE BELLS with @llcoolj @rockhall airs 11/20 on HBO. It was such an honor, 16 y.o. Marshall is so proud – congrats L!’

Eminem wasn’t the only surprise guest during LL COOL J’s set. The 53-year-old actor/MC was also joined by Jennifer Lopez who provided vocals for their 2002 collaboration, “All I Have.” Elsewhere in the set, LL COOL J performed “Go Cut Creator Go” and his quintessential hit, “Mama Said Knock You Out.” As for his acceptance speech, LL COOL J wasn’t salty about the number of failed nominations and instead, showed nothing but appreciation.

LL COOL J has 13 studio albums under his belt, including 1987’s No. 1 Billboard 200 giant Bigger and Deffer and 1990’s multi-platinum Mama Said Knock You Out. He’s also earned two Grammy Awards and was the first rapper to receive the Kennedy Center Honors.

As Eminem pointed out, the Rock and Roll Hall of Fame induction ceremony airs on November 20 on HBO. Until then, watch a clip of their performance below.