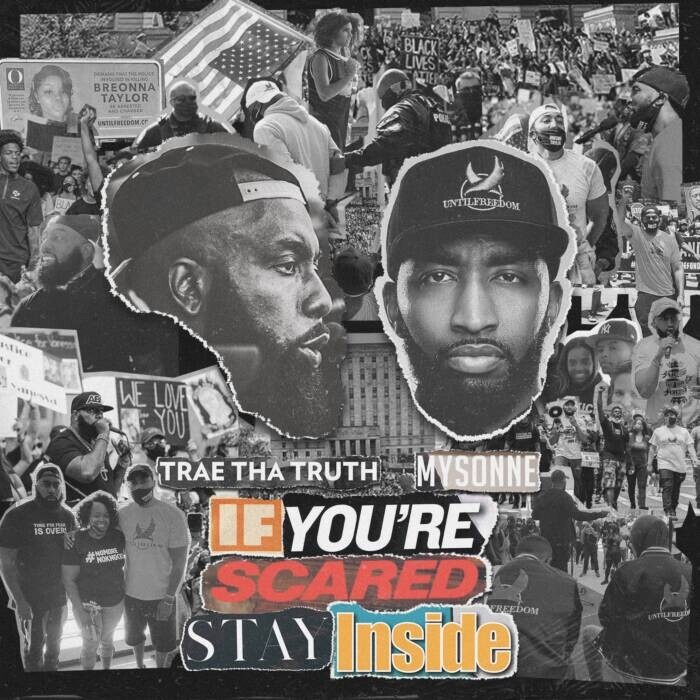 Moved by the tragic murder of Breonna Taylor at the hands of Louisville Police, the artists both uprooted themselves and relocated from their respective hometowns to Kentucky last year to protest the beloved essential worker’s death. While in Louisville Trae and Mysonne decided to use their talents to capture the momentum of the movement through a collection of protest-motivated anthems. Recording the project however was no easy feat as the fight for justice lingered on for weeks with both Trae and Mysonne being wrongfully arrested twice, for simply peacefully protesting. The project strives to keep reform top of mind while being voices for the unheard and underrepresented.

If You’re Scared Stay Inside consists of 14 songs including standout singles; “You Know How We Coming”, “Difference”, “Time for Change” and “Lyrical Cypher” as well as contributions from producers Ayo N Keyz, who were recently ranked No. 1 on Billboard’s Top 100 Producers Chart. Each piece of the collective acts as a unique reflection of the current social climate, the on-going work being made to enact reform, and the sentiments of foot soldiers like Trae, Mysonne, and the others committed to seeing it happen. The February 20th release date was selected as a nod to the international efforts to promote social justice and the continued fight to remove barriers surrounding race, gender, religion, human rights and social protections.

“As long as people in this country are subjected to systematic racism, inequality, and criminal justice disparities, our work is not done,” says Trae Tha Truth. “I am even more dedicated to using my voice and the platform I have as an artist to echoing the voices of the people and protecting their rights and liberties.”

No stranger to activism Trae is noted for being a prolific figure in the Houston community. In the past year alone he has donated to COVID-19 relief funds, held voter registration drives, and provided essential items for natural disaster victims, he jointly organized a peaceful march of over 80,000 people for George Floyd, and spearheaded a Juneteeth Ride for Justice. He was recently honored and recognized for his work at the BET Hip Hop Awards.

The Bronx, NY native Mysonne “The General” splits his time between spitting introspective, brutally honest, and socially conscious lyrics and working to change the social and economic conditions of impoverished communities. He is the co-founder of the intersectional social justice organization Until Freedom, an avid community organizer, and frequently dedicates his time to speaking out against biased policing and inequity in the criminal justice system.

“This project speaks directly to the work we’ve done and are doing to right the wrongful deaths of Breonna, George and the countless others who have had their lives cut short at the hands of law enforcement,” adds Mysonne “We hope that our music can act as motivation and battle anthems for those who are dedicated to justice being upheld in our communities and beyond. This Black History Month in particular we’re reminded that though we’ve come far, we still have much further to go.”