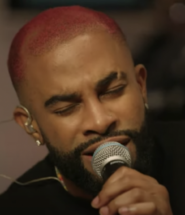 MIAMI, FL – Rick Ross made his Tiny Desk (Home) concert debut for NPR on Tuesday (February 17), but his backup singer Elijah Blake ended up stealing the show for reasons he probably isn’t too proud of.

The talented singer-songwriter became the subject of many jokes and memes throughout the day as his name and pink-dyed hair were thrust back into the mainstream conversation. Blake provided shaky vocals on Ross classics such as “Aston Martin Music” and “B.M.F. (Blowin’ Money Fast).”

Blake heard the chatter and reacted with a series of excuses for his poor performance on Twitter.

“I’m not even gon lie lol was fresh off a flight into 1 rehearsal then boom,” he wrote. “Definitely not my best but I wanted to be there for my bro.”

I’m not even gon lie lol was fresh off a flight into 1 rehearsal then boom! Definitely not my best but I wanted to be there for my bro 🤞🏽

He continued to joke, “Somebody at the gym gon come up to me talkin bout ‘Larry Hooooooova.’”

The 28-year-old R&B singer then posted a reminder to his followers about what his voice is actually capable of on a good day.

“Ok yesterday was cackles and what not!…but let’s not Ackkkkk,” he said. “Sincerely, Buddy with the pink hair.”

Ok yesterday was cackles and what not!…but let’s not Ackkkkk ‼️ Sincerely, Buddy with the pink hair 😆 pic.twitter.com/oRjBVkcar8

It’s a shame Ross’ special Tiny Desk performance has been overshadowed by Blake’s troubled croon, but maybe the social media criticism brings in more viewership to the experience. Blake’s last album arrived in late 2019 with the cheerful Holiday Love, which released via Rkeytek Music.

Check out some of the reactions to Blake’s vocals below.

This dude with the red hair singing background for Ross on NPR is ruining my night.

I love Ross but that Tiny Desk was not it any time Elijah Blake had the mic.

THEY CALL ME BIG MEECH

Who gave this man the floor to do this BS? Did someone call out sick 😂 pic.twitter.com/tuv8c8LVTL

Bruh 😂. Was up there sounding like senior choir Christmas quartet

We shoulda knew he was on some shit soon as we seen this Fit the half jeans half sweats is nasty 😂😂 pic.twitter.com/fROZvdDzo3