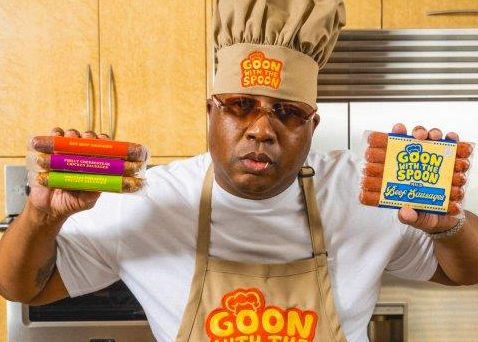 Multiplatinum hip-hop artist E-40 has launched his new food brand, “Goon With The Spoon.” The brand launched with a new line of packaged sausages and burritos.

E-40 drew passion for culinary arts from his upbringing in the inner city, where his mother was balancing three jobs, leaving him to learn to cook for himself. During E-40’s teenage years he worked at a high-end restaurant and made gourmet meals, continuing his interest in food.

The inspiration for the “Goon With The Spoon” brand name came from E-40’s music catalog. As a musician, he rapped about being a “Goon With The Spoon” in songs like “Back in Business” and “I Get Down (feat B-Legit)” as an innovative metaphor to describe his entrepreneurial hustle and ambition.

E-40 will expand his culinary ventures to create cookbooks, cooking shows, and open restaurants. In the coming months, he also plans to launch skewers, ice cream, and pre-packaged meals under the “Goon With The Spoon” umbrella.

E-40 has already ventured into wine, released four new sparkling wines – Cotton Candy, Cali-Mocho Red Wine and Cola, Watermelon, Mango Peach – that were produced in Lodi, California as well as a Prosecco DOC and Prosecco Rose DOC that are produced in and imported from Veneto, Italy.