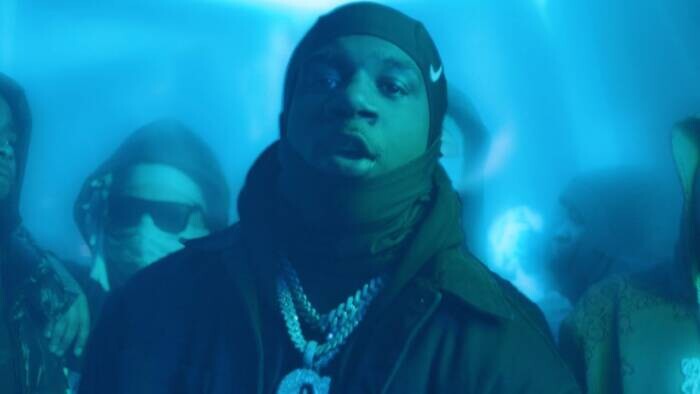 After an explosive breakout year in 2021, DUSTY LOCANE is showing no signs of slowing his rolling and controlling. With the composure of a capo, a roaring rasp that resonates bone-deep, and nothing but momentum on the ascent, DUSTY returns with the new music video for “BIG WOOS.” With a slick assist from fellow BK native Rah Swish, the thunderous standout from DUSTY’S debut album, UNTAMED, serves as a veritable State of the State of Brooklyn Drill address, and rest assured, the borough’s still booming as ever with DUSTY at the helm.

Kicked off by a dedication to fellow Canarsie natives, the late legend Pop Smoke and T. Dott Woo, who tragically passed away just weeks ago, the Nimi Hendrix-directed video is a celebration of life in the truest sense, which sees DUSTY and company mobbing out and living it up like everyday is WOO Wednesday. In a sea of black puffer jackets, signaling wintertime in NYC, DUSTY shines through the crowd, and not just from the iced-out watches adorned on each of his wrists. With the gang behind him and good vibes all around, DUSTY is clearly in his element with all his essentials at hand, listing them off as he raps, “Big breesh, big Woos/Freak treesh, big blues/AP, big jewels.”

Following the seductive Yung Bleu-featuring “WHAT YOU NEED” (1.6 million views) and the high-octane “REWIND,” released last week, “BIG WOOS” is the latest video from UNTAMED, which capped off a massive 2021 for the 22-year-old artist. In December, DUSTY joined the exclusive ranks of artists like Olivia Rodrigo, Coi Leray, Pooh Shiesty, and many more, by being welcomed into the #RIAAClassOf2021 for receiving his first GOLD certification this year with his debut single, “ROLLIN N CONTROLLIN FREESTYLE,” which racked up over 200 million combined streams. The EMPIRE artist struck gold again with “Rolando (Caught In The Rain)” (73 million Spotify streams) and  “ROLLIN N CONTROLLIN PT. 2 (PICTURE ME),” which generated well over 150k video creations on TikTok.