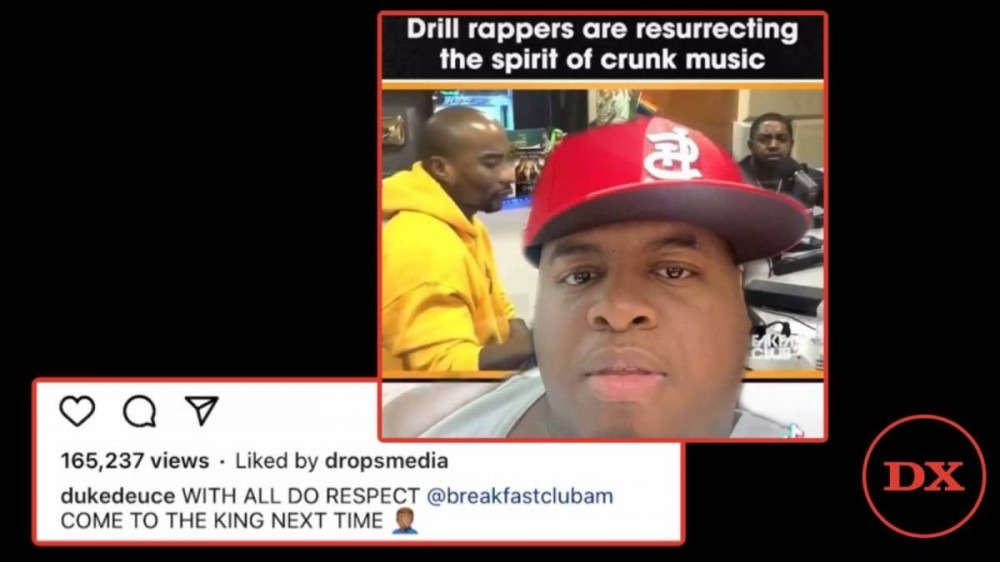 Quality Control artist Duke Deuce is not convinced Lil Scrappy is a credible source to speak on the origins, and or history, of one of the South’s most influential sonic trends of the early 2000s.

In an Instagram post on Tuesday (June 1), Duke Deuce re-posted a TikTok greenscreen video featuring a snippet of Lil Scrappy’s recent Breakfast Club interview seemingly denouncing the “Money In The Bank” rapper’s position on the resurgence of the Memphis-bred brand of crunk music popularized by artists such as Three6 Mafia and 8Ball & MJG.

“WITH ALL DO RESPECT @breakfastclubam COME TO THE KING NEXT TIME,” he demanded in the caption.

The “Duke Skywalker” rapper seemed to initially take offense to his absence from the conversation about the resurgence of crunk, before completely visually deflating as Lil Scrappy compared crunk music to the urban slang term “lit.”

“It’s already there,” Scrappy replied when asked if crunk music could make a comeback. “We just call it ‘lit’ or ‘It’s lit, the club lit right now’ It’s crunk that’s all it is we just changed the word. Drill, all that stuff is just another form another name of crunk because it’s all the generations.”

Duke even interjected in the middle of Lil Scrappy’s response to correct his misclassification of the precursor of crunk as “hype,” (Duke says it was called buck), along with his wild storyline of the progression of the urban slang term.

“Every generation — like before crunk it was something else and then it just changed to ‘hype’,” Scrappy said. “Some other kids they come and change it to something different and it just keeps going — like the name Jesus.”

“Correct! It was called Buck,” Paul chimed in.

Houston’s underground king Killa Kyleon also added in his two cents, remarking at how Lil Scrappy’s reasoning behind the evolution of crunk music doesn’t make sense when paired with the term “lit” which is not representative of the South.

“He outta there BOS you brought back that feeling. crunk ain’t shit like drill or lit. Lit ain’t even southern terminology crunk a whole other level!” Killa Kyleon remarked.

Lil Scrappy is actually among the most popular 2000s era crunk artists to deliver a major label debut after flooding the streets with hit records such as “Neva Eva” featuring Lil Jon and Trillville. Scrap and Trillville actually teamed up for their 2003 collaborative album The King of Crunk & BME Recordings Present: Trillville & Lil Scrappy, which peaked at the No. 12 spot on the Billboard 200 and No. 3 on the Top R&B/Hip Hop Albums Charts.

In contrast, Duke Deuce emerged in 2019 following the viral moment he created with the electric visual for his fan-favorite “Crunk Ain’t Dead” single, which currently has amassed well over 26 million views on YouTube thus far.

In addition to uttering his ill-received crunk music comments, Lil Scrappy also recently spoke at length about his experience joining the cast of VH1’s Love & Hip Hop reality TV show, revealing a surprisingly shocking revelation about his motives behind embracing his role within the series.

During an appearance on REVOLT’s Big Facts Podcast, Scrappy confessed Love & Hip Hop was somewhat of a scapegoat for his failing music career.

“I thought about, I was like, ‘Shit, I ain’t even got a rap career right now, so, you know what I’m saying, I don’t even give a fuck.’” Lil Scrappy said “When I say I’m connected with the god that created me, like, he put something in me. He was just, like [Big] Bank said man, ‘Just keep that shit gangster, be yourself, my n-gga.’”