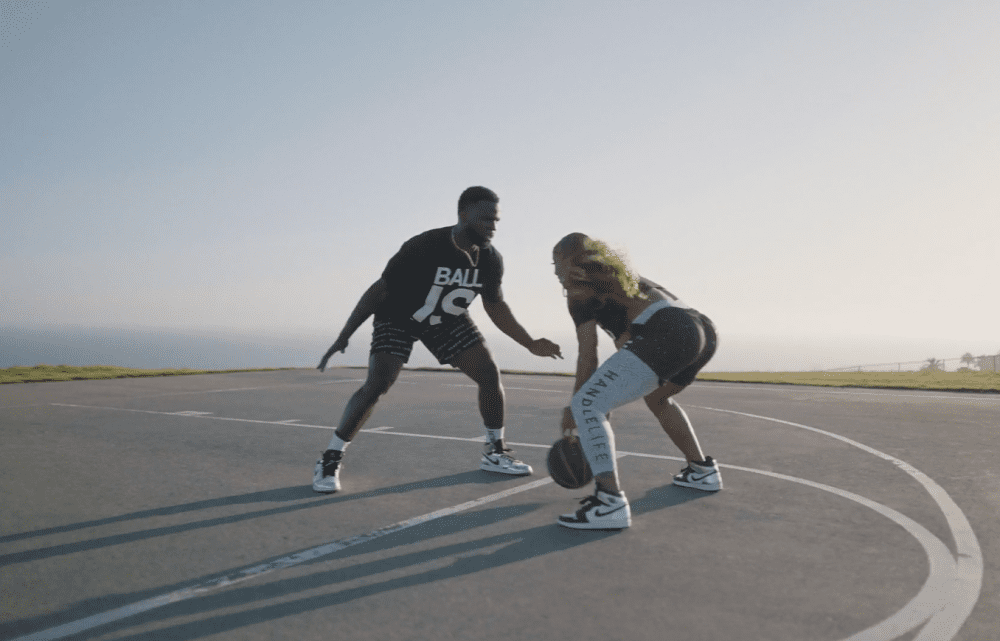 Dribble2Much, an NBA trainer, influencer, and rapper, has recently debuted the music video for his new song “Crazy In The Park.” Dribble2Much is not just one of the most in-demand basketball instructors in the league but is also a rapper who has crossed over from the world of instruction. His video proves this.

The WNBA player Te’a Cooper plays Dribble2Much and his close friend in the film, which chronicles their shared passion of basketball from childhood to maturity as Dribble2Much brags about his on-court prowess.

Ahead of the release of the video, Dribble2Much spoke with The Source about his career, his blend of sports and rap, and more.

The SOURCE: When did you first start to rap, and what led up to the release of “Coach Rappin”?

Dribble2Much: I started rapping in the 7th grade. I always used to freestyle in the lunchroom. When I started developing my brand, HandleLife—my basketball brand—I started to make music and content for the visuals for the athletes who would watch my stuff on social media. I filled it in with my own music to help basketball players focus more on the game.

Hip-Hop and basketball often intersect each other. What was the origin of that crossover for you?

I had a lot of hip-hop artists and entertainers that loved basketball. And, a lot of basketball players like music, or athletes in general. I love the fact that I always knew how to do music. I was able to bridge the gap between basketball and music.

Athletes have a history of not being taken seriously in the music industry because it’s a full-time job for some of these artists. But nowadays, athletes are starting to put a lot of time towards the craft. People like Damian Lillard, who’s going to be on my album. People like Le’Veon Bell or Kevin Durant, who’ve been featured [on my songs]. These athletes are putting time into their music and are just as talented as any other artist in the world.

How did you become one of the go-to trainers for the best in the league? Also, how did you turn that into working out with some of Hip-Hop’s biggest stars?

I became one of the go-to trainers for the best in the league when I started focusing on my craft, which is dribbling. I always had great handles whenever I played basketball, and it took me to graduate college on a scholarship playing point guard.

What made me lock into the niche was I saw that nobody was really focusing on dribbling skills in basketball. When I started putting out the content on social media through the Dribble2Much and HandleLife page, a lot of athletes would comment on my page and tell me they need my help. That’s how I became the go-to guy. It all started with social media content, showing off my dribbling skills and the way I’m able to help kids and athletes perform.

I turned that into working with some of hip-hop’s biggest stars. Hip-hop artists like Drake, 2Chainz, they would love the game so much and always want to be a part of the game or train or understand how to develop and get better. And, these artists are just as competitive as the athletes, so when they learn a particular skill, they tend to lock in and focus on the skill they’re learning and trying to perfect it to become a better athlete, which is good for their physical health.

So, I just bridged the gap with these artists and started bringing a healthy lifestyle, a competitive environment where you learn new dribbling skills and learn things that NBA guys are learning, and they apply that to their own competitive circles when they’re hooping with their crew.

Seeing that you lend your skills and insight to rap stars, have they supplied any helpful details to you?

I think they do a lot by just letting me be around their circles and seeing how they move, seeing how they focus on the craft, and I’m just teaching them the skills. They let me know I have to invest in myself when it comes to music and really tries to perfect my skill.

A lot of the artists have shown me love, posted my songs, and talked about my music. Kevin Durant knows all my lyrics. Drake knows the lyrics to “Ankle Bully,” “Let it Fly.” “Crazy In The Park” is one of Drake’s favorites. I personally texted him that song and he told me, I’m the best hoop-rapper alive, period.

So, when I got the stamp from Drizzy, that just gave me more confidence on going to make music for these athletes and these entertainers.

What songs or projects have you worked on that you are most excited for the general public to hear?

I’m just most excited about the overall upcoming project in general. The variety of songs and the story-telling ability that I showed on this last album. And, being able to cater to different audiences. I’m really proud of the album that’s coming out and the singles I’ve been releasing like, “Crazy In The Park,” or “HandleLife Story.” These singles that I’ve released are really good songs. I’m really excited for you guys to hear the rest of the project and the new things we’ve got to drop.

We don’t have a name for it yet, but we got so many songs. The motivation behind the project is being able to tell the story of the kid that loves basketball that faces different challenges from growing up in poverty and not having a choice, really, between basketball, drugs and also the game about how it is when you become a star and women start to look at you different.

We got things like, bars like in “Crazy In The Park,” real gritty and the storytelling ability. The project overall is just a big time motivator. If you’re in the gym lifting weights or training for any type of sport, you throw on that Dribble2Much and you’re going to be motivated to do some extra reps.

What are your goals in both training and as an artist?

My goals in training and as an artist, I want to be able to one day sell out basketball arenas. To be able to perform and sell out a whole arena and everybody in there knows my music.

And, as a trainer I want to be able to be training the pro athletes that’s in the same arena. To be able to spread the knowledge of who I am and what I do when it comes to training. I feel like they both tie into each other. I wouldn’t be a great artist if I didn’t have the training capability that I have. It’s just another repetition of discipline, teaching, learning, and studying the game. Those are the same rules that I apply to the artist side.

My goal is to continue to be in the life of basketball and keep motivating the athletes all around the world to keep pushing to be the best athlete they can be through my music.