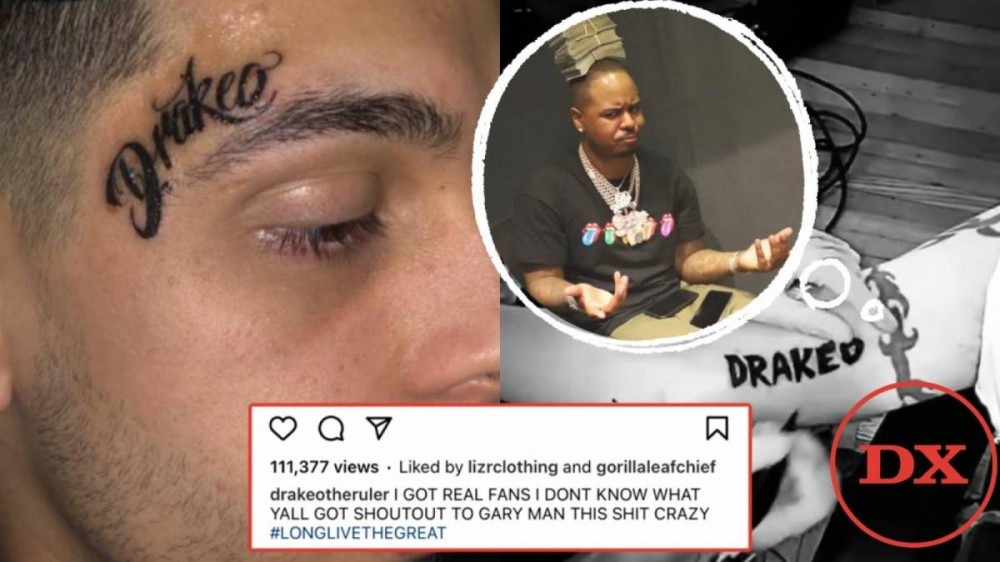 Los Angeles, CA – Los Angeles street rap juggernaut Drakeo The Ruler has been consistently dropping music since his release from prison last November and as a result, his fanbase is increasing far beyond the West Coast at an exponential rate.

In a tweet on Saturday (April 24), Drakeo The Ruler declared the photo of what appears to be a super fan who got a tattoo in his honor just above his eyebrow to be “Legendary” while also seemingly laughing in amusement by the move rooted in obvious admiration.

Drakeo’s face tatt fan is going viral just days after the Truth Hurts rapper shared a video of another one of his stans in the process of getting his rap name tatted on their flesh. In the black and white clip, a man Drakeo refers to as Gary is getting the finishing touches on a gaudy inner-arm piece while the Stinc Team Records lyricist’s music rages on in the background.

“I GOT REAL FANS I DONT KNOW WHAT YALL GOT SHOUTOUT TO GARY MAN THIS SHIT CRAZY #LONGLIVETHEGREAT,” Drakeo wrote in the caption.

Following a co-sign from OVO’s messiah Drake on their anthemic summertime takeover-ready “Talk To Me” collaboration, which has accumulated more than 13 million streams on Spotify alone since February, Drakeo The Ruler has become a go-to collaborator and infiltrated the core listening base of several mainstream rappers in the process.

Along with his assist on Bay Area rapper ALLBLACK’s TY4FWM (Thank You 4 Fucking With Me) single “Ego” Drakeo The Ruler has notched meaningful collaborations with Blxst, Shordie Shordie, Bino Rideaux and Saweetie on their flirty Pretty Summer Playlist Season 1 track “Risky.”

Stream A Cold Day In Hell below.