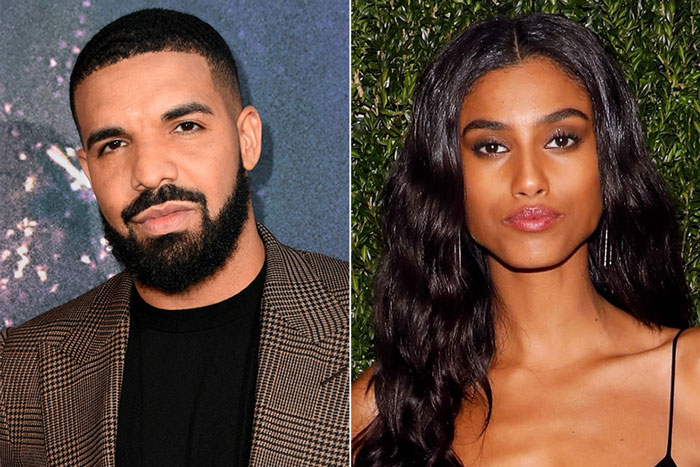 Drake may have a new ting.

The “Life Is Good” rapper is sparking romance rumors with Imaan Hammam after he was spotted leaving the supermodel’s apartment on Thursday morning. According to the Daily Mail, Drake exited the 23-year-old model’s apartment shortly after she left the building.

Drake was photographed wearing a black T-shirt under a black and blue North Face puffer jacket while carrying a black Chanel overnight bag and another red bag.

Just hours earlier, he and the Dutch Moroccan/Egyptian model were reportedly seen kissing at the Flur Room before heading back to Hammam’s apartment following the Nike fashion show.

The OVO boss was in NYC for Nike’s 2020 Olympic Collection fashion show, where he sat front row alongside Rosalía, Travis Scott, Kendrick Lamar, Virgil Abloh, and gymnast Gabby Douglas. After the show, he attended a private dinner with Rosalía and Travis.

While their relationship status remains unclear, Drake has been linked to Hammam in the past and has liked her posts on Instagram.

Last week, Drake leaked his new song “Desires” with Future, while their collaboration “Life Is Good” was recently certified platinum.

Rosalía and Drake attend the #Nike2020 fashion show in NYC