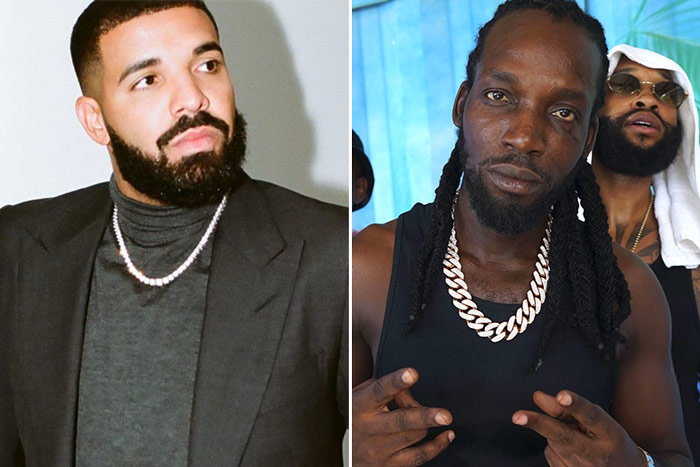 After hearing Mavado’s “Enemy Line” diss track, on which he takes aim at Drake for appropriating dancehall, the Canadian rapper is clapping back. During Popcaan’s Instagram Live on Thursday night, the 6 God seemingly responded to the Gully God.

“Some bwoy love chat about yaad man and some next fuckery and all now dem can’t catch up to the 876 Gad go hold a one seat and a box juice and hush ya mout OVO UNRULY,” he wrote in the group chat.

THIS IS WHAT DRAKE HAD TO SAY ABOUT MAVADO ON POPCAAN IG LIVE pic.twitter.com/nIdR9BCXoh

Drake ignited the feud on his “Only You Freestyle” with Headie One on which he took subliminal shots at the dancehall superstar by referencing Cassava Piece, Mavado’s hometown in Kingston, Jamaica, and Mavado’s Gully vs. Gaza feud with Vybz Kartel.

“With Pop Skull in Gaza, but not that Gaza, but still it’s a mazza / Ni**as want peace like Cassava / But we let bridge dem burn like grabba,” Drizzy raps. “Four in the cliz and one in the headie / Hand no shake, man, hold that steady / You man love pose with the ting for the picture / You man shoulda buss dat ting already.”

Last week, Mavado fired back on his “Enemy Line” diss track. “Tell soft and fake likkle sheep, like Mormon, die trying but you will never be a yard man,” he told Drake.

Mavado also took to Instagram to address his rival and his appropriation of dancehall. “You are not from Dancehall,” he captioned his post. “You have no Power in Dancehall n everybody know who introduce you to Dancehall so don’t feel like you can come disrespect Gully take that out you brain n don’t dweet again.”

Mavado appeared in Drake’s “Find Your Love” video in 2010, but their relationship soured over the years reportedly over a joint business venture that fell through.