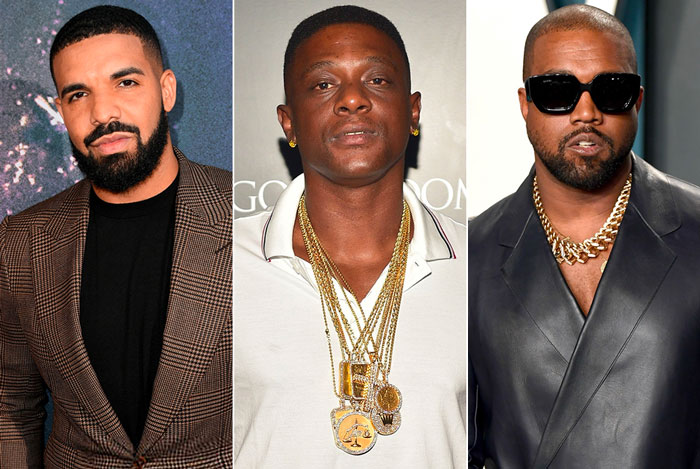 The Baton Rouge rapper called out the Yeezy mogul after he kept bringing up Drake in his tweets. “@kanyewest WHY U CANT KEEP DRAKE OUT YO MOUTH BRA🤷🏽‍♂️IM GO SAY IT,” Boosie tweeted along with the hashtag #stophatin.

According to Boosie, Kanye’s obsessive tweeting about Drake is a sign of jealousy. “YOU SHOWING STR8 JEALOUSY N YOU AINT EVEN GOTTA DO THAT 🤷🏽‍♂️U RICH RICH NI**A 💰SMH,” he added.

Kanye continues to mention Drake in his tweets. Earlier in the week, he demanded an apology from him and J. Cole. “I need a publicly apology from J Cole and Drake to start with immediately … I’m Nat Turner … I’m fighting for us,” he tweeted.

He also brought up Drake while discussing his plans to help artists gain freedom from major labels, and jokingly excluded Drake.

“WE’RE GONIG TO TRANSPARENTLY CHANGE EVERY ALBUM DEAL EVERY PUBLISHING DEAL EVERY MERCH DEAL EVERY TOURING DEAL EXCEPT FOR DRAKE’S DEALS,” he declared, adding, “JUST KIDDING … I LOVE DRAKE TOO … ALL ARTIST MUST BE FREE.”

Drake has not directly responded to Ye, but he previously addressed their rift, which was exacerbated by his beef with Pusha-T. “Things have changed. I’m not just some kid that’s a fan anymore,” he told TIDAL’s “Rap Radar” podcast last year. “Now we have personal situations, and like I said, a lot of his issues with me, I can’t fix them for him.”