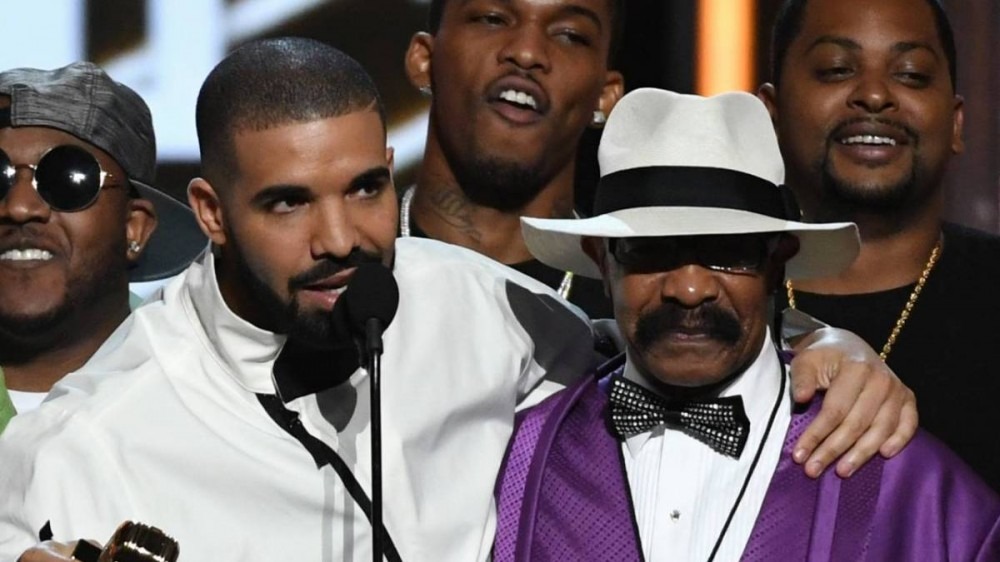 Drake‘s father Dennis Graham recently had a new tattoo of his famous son done — but the rapper’s not too impressed by it.

The 6 God took to Instagram on Monday (August 8) to post a photo of his dad’s tattoo, which is a portrait of a younger Drake resting on his right shoulder, along with a less-than-thrilled caption.

“@therealdennisg I was just sitting here thinking why you do me like this we family,” Drizzy wrote in the caption along with several laughing emojis.

According to TMZ, Graham got the ink back in 2017 from tattoo artist Money Mike, who pulled up to Graham’s house for a four-hour appointment and did the tattoo free of charge.

“Had the honor and privilege of tattooing @champagnepapi fathers portrait on the man himself @therealdennisg,” Mike wrote on his website at the time. “thank you again Dennis for the hospitality and for letting me do this for ya. CHUUUCH.”

Graham — who has appeared in numerous Drake music videos and had a music career himself as a drummer for Jerry Lee Lewis — apparently wanted to return the favor after his son got his mugshot tattooed on him years prior.

Dennis Graham isn’t the only family member Drake has inked on his body. The OVO boss also has portraits of his late uncle, grandmother and mother on his back, as well as tributes to Lil Wayne, Virgil Abloh, Sade, the late Aaliyah and his longtime producer Noah “40” Shebib.

In other news, Drake reunited with Lil Wayne and Nicki Minaj on Saturday (August 6) for his October World Weekend festival. The YMCMB trio took over Toronto’s Budweiser Stage for their first performance together in almost a decade.

At one point during the concert, Drizzy paid tribute to Weezy — who signed him to Young Money in 2009 — and referred to him as the “most self-less man on planet Earth.”

“I came on your tour bus … and you gave me $30,000 that I was able to bring home to my mother, and that changed the next, like, six months for us,” he said. “That’s the most important amount of money I’ve ever made in my life. You’re the most important man to each and every one of us.”

At the end of the star-studded show, Lil Wayne interrupted Drake’s farewell speech to reveal his Tha Carter VI album is on the way. “I’m working on Carter VI, coming soon,” Weezy told the crowd.

A giant sign reading “Tha Carter VI” appeared on the onstage screen as the night came to a close.