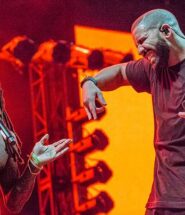 Lil Wayne celebrated his 38th birthday on Sunday (September 27) and while many of his peers, fans and more sent their well wishes to Tunechi, Drake reiterated how much the New Orleans rapper meant to him.

The More Life artist took to Instagram and shared a collage of photos of the two throughout the years from their Drake vs. Lil Wayne Tour in 2014, Drizzy’s impersonation of Wayne on Saturday Night Live and a still shot from their “HYFR” video in 2011 among others.

“More life to the man that gave me everything I have!!! My GOAT and not just on some emoji shit,” Drake wrote on Sunday (September 27). “Sometimes I wanna drop a tear but no emotions from a king…shall be…so I be…who I be…that’s me…that’s Weezy F Baby and please say the mothafuckin…”

More life to the man that gave me everything I have!!! My GOAT 🐐 and not just on some emoji shit. Sometimes I wanna drop a tear but no emotions from a king…shall be…so I be…who I be…that’s me…that’s Weezy F Baby and please say the mothafuckin…

Drake amplified is love for Wayne by flipping one of Weezy’s classic singles, “Hustler Muzik” from Tha Carter II released in 2005. Four years after the single, Wayne brought Drake on board for the America’s Most Wanted Tour and signed him to Young Money Records. The rest is history.

Weezy and Drake showering one another with praise isn’t a new occurrence. Last month, Drake shared a clip from Wayne’s sit down with journalist Elliott Wilson and praised Weezy for his selflessness in believing in him when no one else would.

The chemistry between the two has resulted in quite a few collabs such as 2010’s “Right Above It,” 2014’s “Believe Me” and Wayne’s longtime manager Cortez Bryant has suggested a follow-up to their successful Drake vs. Lil Wayne tour is possible.

“My favorite tour of them all was this Drake vs. Lil Wayne tour,” Bryant told Brian “B Dot” Miller on his Art Of Facts show. “The concept was crazy … This was my favorite tour ever, man. Drake came up with the Street Fighter concept. I’m not taking credit for that. Drake came up like, ‘Yo, I got a dope ass concept.’ So the Street Fighter collaboration with all the graphics and content that we had on the screen – I thought that was dope. It was a fun tour. We had fun every night. It was at a time when Drake had arrived as an artist. From seeing him from the inception as a superstar himself and mentor and mentee just going on the stage, having fun, talking a little shit during the whole time … And they talked about [doing a second run]. I think we do need to do it again.”