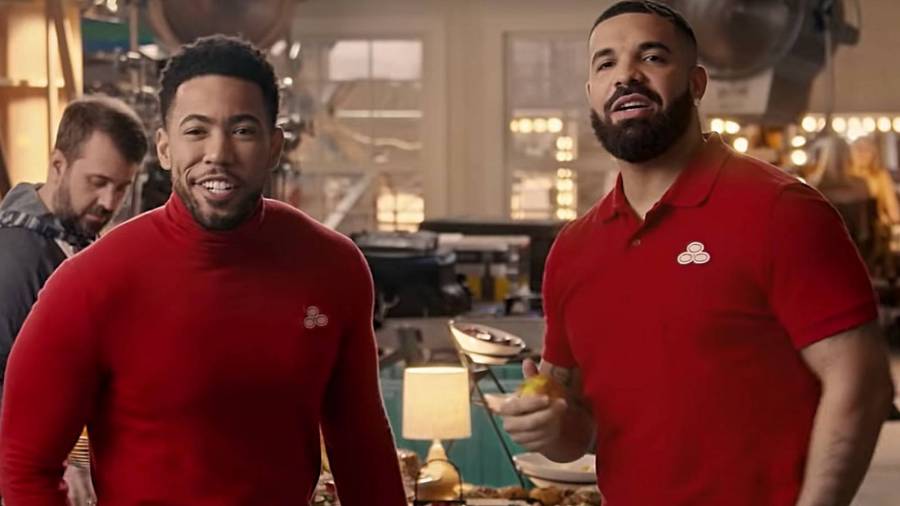 Super Bowl LV took place on Sunday (February 7) and saw the Kansas City Chiefs get destroyed by the Tampa Bay Buccaneers, 9 to 31. But for those more interested in the Big Game commercials, there were a few standouts that got Twitter talking, namely the plug for State Farm Insurance.

Yes, it starred “Jake from State Farm,” but the ad spot also featured a surprise appearance from former Degrassi actor and music superstar Drake. The behind-the-scenes style clip, which aired in the first half of the game, plays on the concept of body doubles or “stand-ins” with actor Paul Rudd and Adrian Martinez AKA “The Cheesehead.” It culminates when Drake — dressed in State Farm’s signature red shirt and khakis — introduces himself as Jake’s stand-in.

But even as Drake and State Farm trended on Twitter, fans appeared less interested in the ad and more concerned about Drizzy’s long awaited follow-up to 2018’s Scorpion — Certified Lover Boy.

Comments such as “Drake got free time to do super bowl commercials but can’t drop the album that he said he’d drop 6 months ago … sigh” and “Drake really delayed his album to make a State Farm commercial” started pouring in as fans grew increasingly frustrated with the project’s delay.

Drake announced he was releasing Certified Lover Boy in January 2021 but broke his fans’ hearts when he moved the goal post.

On January 20, the multi-platinum artist updated his fans via Instagram, explaining, “I was planning to release my album this month but between surgery and rehab, my energy has been dedicated to recovery. I’m blessed to be back on my feet, feeling great and focused on the album, but CLB won’t be dropping in January. I’m looking forward to sharing it with you all in 2021.”

Unfortunately for Drake’s fans, he didn’t commit to a particular release date. As the wait continues, check out some of the reactions to Drake’s State Farm ad below.

Drake really held off on his album release to make a State Farm commercial pic.twitter.com/ItUo2UXYby

drake could be in that funky State Farm commercial but not drop his album? pic.twitter.com/aXRMBIzKGT

Drake delayed his album for a State Farm commercial pic.twitter.com/RQWawVQgI2

@Drake you got time to film State Farm commercials but not enough to release the album? Sir, we need to talk.

So @Drake can do a State Farm commercial but can’t drop the album? pic.twitter.com/AlMp4vIZjj

drake out here delaying his album to make a state farm commercial 😐 pic.twitter.com/hgwPPfUC96