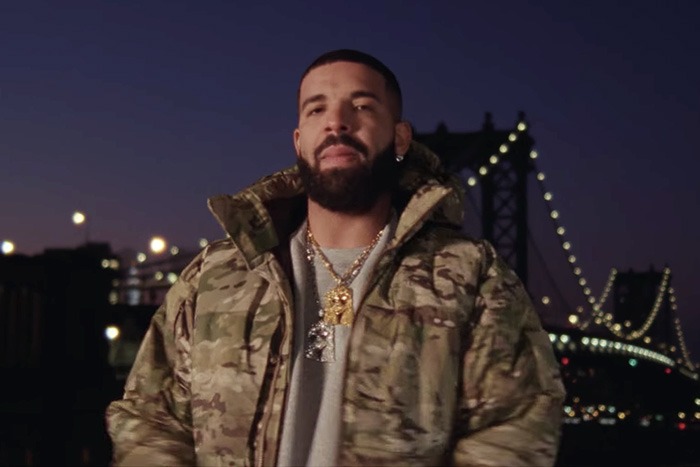 Drake surprised fans on Saturday night by dropping a pair of new tracks.

“When to Say When” and “Chicago Freestyle” mark his first new music since his Future collaborations “Desires” and “Life Is Good,” and arrive alongside a Theo Skudra-directed visual.

Over a sample of Bobby Glenn’s “Sounds Like a Love Song,” which JAY-Z sampled on “Song Cry,” Drizzy boasts about his accomplishments. “500 weeks I filled the charts with my pain / 500 mill and I’ll fall back in the 6 / Finally give you ni**as some space you need to exist / Michael Jackson shit, but the palace is not for kids,” he raps.

He also shouts out his mother Sandy Graham and Philadelphia 76ers co-owner Michael Rubin (“I watched Michael Rubin win a million off a couple hands”).

In the video, he hits up various spots in NYC including the Brooklyn Bridge and JAY-Z’s old stomping grounds of Marcy Projects. He also cops some new ice at Jacob & Co.

The beat then switches up for “Chicago Freestyle” as the 6 God heads home to Toronto. He gives a tour of his massive mansion dubbed “The Embassy” and rides around town in his Rolls-Royce with an OVO owl in place of the Spirit of Ecstasy ornament.

Giveon provides the soulful hook, while Drake borrows from Eminem’s “Superman” in the lyrics. “Women they come they go / Saturday through Sunday Monday / Monday through Sunday, yo / Maybe I’ll love you one day / Maybe we’ll someday grow,” he raps.

He makes a stop at luxe Japanese sushi bar Shoushin, hits the studio with 40, and counts stacks of cash before placing it in his safe.

The two tracks arrive ahead of Drake’s new album, which he says will be shorter than 2018’s Scorpion. “This album, I’ll probably make it a more realistic offering, something more concise,” he said during a recent Toronto Raptors game. “Anywhere, whatever you want, it can be 10, 11 songs, 16. I also do a lot of different types of music so it’s tough to make it like a seven-song album or something like that. But yeah, I’m having a lot of fun right now making music.”