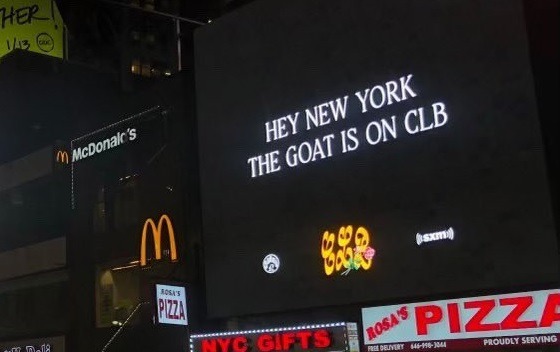 Drake’s Certified Lover Boy album details continue to pour out. Throughout Wednesday, The Boy dropped Billboards across the country, telling fans in different cities that their hometown hero will appear on the album.

Elliott Wilson highlighted the countrywide drops, letting fans in Chicago, California, Atlanta, Memphis, and Houston know that the Toronto legend has some heat on the way.

In some cities, Drake is very blatant in letting fans know who is featured. Drake specifically let Chicago know that Lil Durk is involved, while a quartet of Atlanta stars in Future, Lil Baby, 21 Savage, and Young Thug are present. Memphis is held down by Project Pat and Yebba, while California will have Ty Dolla $ign and Giveon. The mystery comes in for Houston and New York City.

For NYC, Drake simply stated, “The GOAT Is On CLB.” Many believed the universal selection for the GOAT is JAY-Z, but some online have left room open for Nicki Minaj as the ad could hint at a pick for the GOAT of women rappers.

For Houston, Drizzy states the Hometown Hero is on the album. That led many to believe that it was Travis Scott, while some also wondered whether it could4 be Beyonce. There are also some darkhorse candidates in Trae Tha Truth and Bun B.

Check out the Billboards below and let us know who you think the NYC and HTown picks are.