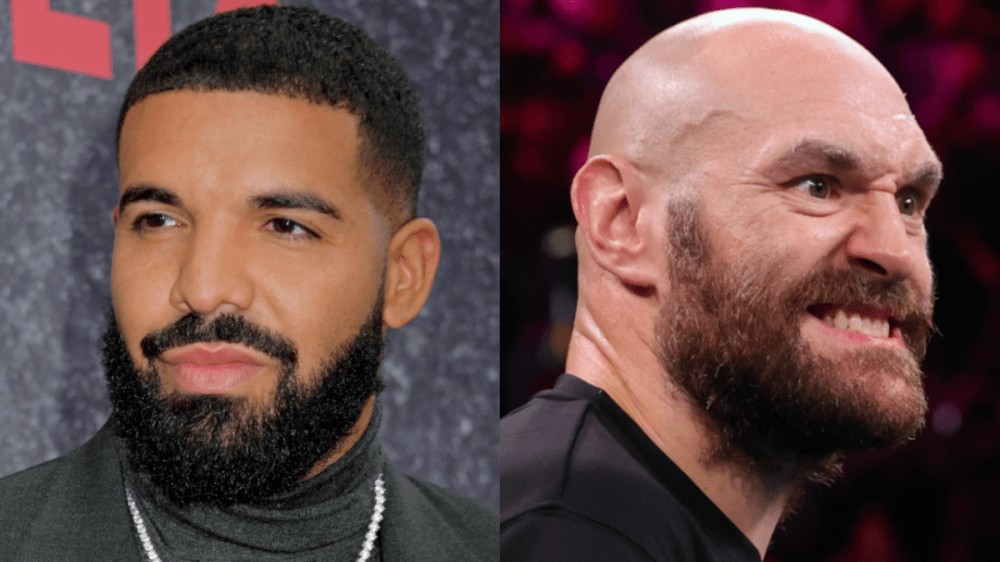 Las Vegas, NV – Drake showing his support for athletes and sports teams has commonly been seen as a form of bad luck over years gone by. But with Tyson Fury knocking out Deontay Wilder on Saturday (October 9) to close out their epic boxing trilogy, the so-called ‘Drake curse’ didn’t happen on this occasion.

Ahead of the giant heavyweight fight at T-Mobile Arena in Las Vegas, Drake sent a video to the British boxer offering his best wishes against the American.

“This is a video for the most psycho man that I know,” Drizzy said. “He’s mad in his head but he has the purest heart. Nicest guy. The Gypsy King. Scariest man in boxing. I’m wishing you the best of luck this weekend, brother. I want you to just go out there and continue the legacy. Do what you do. We all love ’cause you’re relentlessly yourself.”

He continued, “So, go out there and get the work done. And afterward, fucking sing your heart or say whatever the fuck you wanna say. But I’ma tell you brother, we’re all so proud of you. We love you, and I appreciate you always staying in contact with me. You know, I appreciate the encouragement, the inspiration. Yeah, man. I’m looking forward to seeing the end result this weekend. Wishing you the best always. I’ll see you on the other side. Fuck ’em.”

Tyson Fury posted the video on Twitter with the caption, “Trust me @Drake, once I’m done with him he’ll be running through Alabama with his woes! God Bless You G.”

Trust me @Drake, once I’m done with him he’ll be running through Alabama with his woes! God Bless You G 🤝 🦉 pic.twitter.com/QMAt0G7LZr

Deontay Wilder ended up getting knocked out by Tyson Fury in the 11th round to deliver his second straight win against The Bronze Bomber, following his previous victory in February 2020.

Well aware of the ‘Drake curse,’ Tyson Fury took to his Instagram Stories on Sunday (October 10) to laugh off any idea of the superstition with DJ Khaled’s “I’m on One” playing in the background.

“@champagnepapi curse? No such thing pal,” he wrote alongside a laughing emoji. “GK x OVO. #AndStill.”

The ‘Drake curse’ was seemingly broken in June 2019 when his beloved Toronto Raptors beat the Golden State Warriors to win their first ever NBA Championship. Over the years, Drizzy taking photos with Anthony Joshua, Serena Williams and Conor McGregor have led to losses, as well as soccer stars such as Jadon Sancho, Romelu Lukaku, Pierre-Emerick Aubameyang and Sergio Aguero.

Italian team A.S. Roma even banned players from taking photos with Drake until the end of the 2018-19 season in order to protect themselves from bad luck.