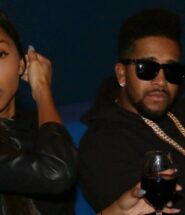 Dr. Dre’s personal life is already chaotic due to his ongoing divorce proceedings with his wife of 24 years Nicole Young. But things were taken up a notch last week when he was spotted dining with a “mystery woman” who was later identified as Apryl Jones, the mother of Omarion’s child.

As the chatter on social media exploded, former Love & Hip Hop: Hollywood personality and Lil Fizz’s ex Moniece Slaughter decided to confirm Dre and Jones were indeed in a relationship but questioned why “someone like Dre” would be interested in her.

Now, with Dre and Jones at the center of controversy, his purported girlfriend has granted an exclusive interview with MadameNoire in which she made some interesting revelations. At one point during the conversation, Jones claimed she only did the VH1 reality show to quell gay rumors about Omarion.

“That whole situation with me and O on Love and Hip Hop was completely controlled,” she said. “I never even wanted to do freakin’ reality TV. His management thought it would be good for him to show who he was and his life because there were gay rumors. So to show he was in a relationship with a woman and having kids and all that, they thought it would be great. If you love somebody you’re going to do it, but it just felt very controlled. I wasn’t really myself.”

Jones explained she was pregnant during both stints on the show and wasn’t really herself at the time.

“When I came out of that relationship, which was fully fucking controlled and it was a lot going on, I was like ‘Oh my God,’” she continued. “I totally lost myself in that. Now I’m back to being the fun Apryl, the Apryl who doesn’t give a fuck. I would have went on the show doing that but because I had respect for him I was like, alright, let me shut up. People don’t pay attention to the fact that when you’re in a relationship, you have to take all of that into account.

“You’re protecting somebody. You’re essentially wanting to make that person happy so you’re willing to do whatever it takes to do that. I think that was my case, and it didn’t serve me. But it served him, so as long as it served somebody, shit, that’s fine. I’m good.”

According to Slaughter, Dre has essentially “wifed up” Jones and the two have been in relationship for “awhile.” But Dre allegedly didn’t want that information out there and Slaughter claimed someone from Dre’s camp threatened her, causing her to lash out in an Instagram Live video.

“I don’t take kindly to threats,” she said in the clip. “I’m trying to save it for the interview tomorrow but I don’t know if I can hold it … how dare you send a n-gga to bang my muthafuckin’ line and threaten me? I don’t care who you think you are, I don’t care who the world has told you you are. I don’t know you and you don’t know me and I didn’t say anything negative about you, sir! And it wasn’t negative.”