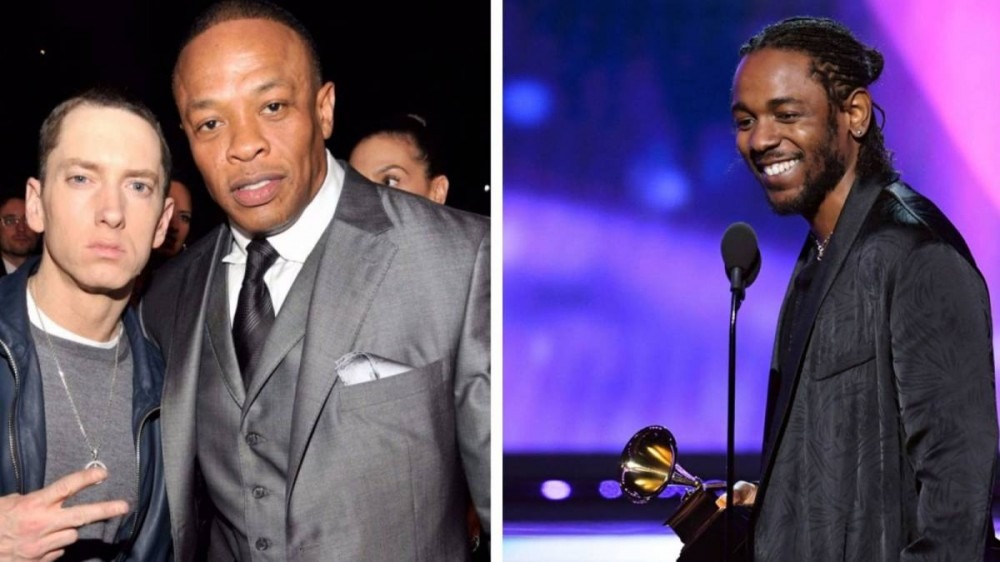 Grammy Award-winning producer and frequent Dr. Dre collaborator Fredwreck sparked collaboration rumors on Tuesday (April 27) when he posted an old photo of Kendrick Lamar, Dre and Eminem with their arms around each other on Twitter.

He simply captioned the photo, “Beats n Rhymes #shady #aftermath,” suggesting Dre could be the producer and K. Dot and Slim Shady could be the MCs on a top secret project.

On Saturday (May 1), Dr. Dre and Kendrick Lamar — who’ve collaborated on songs such as the 2012 good kid, m. A.A.d city track “The Recipe” — both became trending Twitter topics as speculation about the collaboration reached a fever pitch.

As one Twitter user wrote, “So we’re getting a Dr. Dre album with possible Kendrick Lamar & Eminem on the same track ???? Say ain’t so.”

So we’re getting a Dr. Dre album with possible Kendrick Lamar & Eminem on the same track ???? Say ain’t so pic.twitter.com/DRYgOcB5WC

On Wednesday (April 28), Top Dawg’s official account fired off a tweet that read, “THE WAIT IS OVAH!!!! #TDE.” The post came with an animated GIF of what looked like a computer booting up and the date “5/7/21” at the end.

THE WAIT IS OVAH!!!! #TDE pic.twitter.com/MVjWIO7o7L

Of course, it’s been over four years since Kendrick unleashed his Pulitzer Prize-winning album DAMN. and fans are more than ready for a follow-up.

But TDE has several other artists on their roster who could be dropping as well, including Isaiah Rashad, SZA or REASON. Like the rest of the Hip Hop community, Kendrick fans will have to wait until Friday (May 7) to find out.

When pressed for more information, he revealed Eminem would be appearing on the project as well. Eminem and Kendrick Lamar first joined forces on the track “Love Game” off Shady’s 2013 album The Marshall Mathers LP 2, so another collaboration wouldn’t be too far-fetched.

Well he def on this one lol.