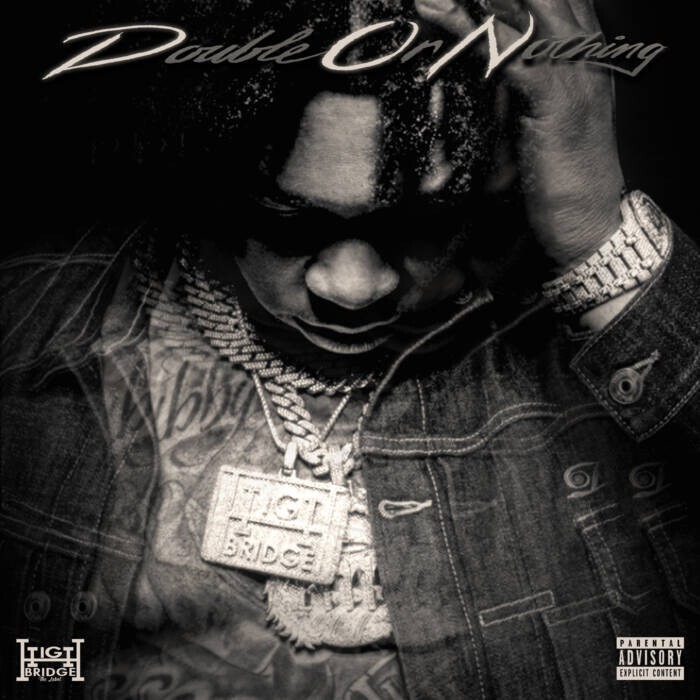 Known for his bruising tough-talk and his sharp lyrical mind, Bronx rapper Don Q is highly-respected in the Five Boroughs and beyond. Laying all his cards on the table with his new statement of purpose, Don Q announces Double Or Nothing, his next project. Charting his progression from upstart to young OG, Don’s upcoming project is packed with hard-earned wisdom he picked up on the streets and in the music game. Influenced by mob movies and the cinematic rap epics of NYC’s past, the new project finds the Highbridge The Label artist locks into each instrumental, organizing his Bronx tales and assonant internal rhymes into lockstep cadences. Musically, Double Or Nothing mixes a grimy old school NY sound–with ominous pianos, scuzzy snares, and whirring woodwinds–with the occasional dip into the sliding 808s and triplet flows that define the city’s ascendant drill scene. His first new full-length since the release of 2018’s Don Season 2, Double Or Nothing arrives on October 22nd via Highbridge The Label/EMPIRE.

Along with the announcement of Double Or Nothing, Don shares the video for “True King,” the project’s opening track. The song opens with dramatic sweeps of strings, and without drums, as Don provides the percussion with his triplet cadences and expert sense of rhythm. In his lyrics, Don Q reveals a ruler’s mindset, lapping up his life of luxury even as he processes residual trauma from his past and constantly keeps his head on a swivel in search of the next threat to his reign: “I take my emotions and bottle them in/I never focus on following trends/When I was broke I thought soon as I made me some dollars I swear that my problems would end.” Directed by Starr Mazi, the video finds Don holding court in the outskirts of the Bronx, surrounded by tricked-out ATVs, dirtbikes popping wheelies, and a pack of bulldogs, a breed whose dogged determination provides an ideal analogy for Don Q’s refusal to back down from any challenge.

Born and raised in The Bronx, Don Q grew up idolizing brash NYC rappers like Jadakiss, Cassidy, Fabolous, and Jay-Z. After making waves in the streets with mixtapes that highlighted his lyrical acumen, Don Q signed to Highbridge in 2016. From there, Don and fellow Highbridge rapper A Boogie Wit Da Hoodie experienced a rapid rise through the NYC rap scene, sharing the popular Highbridge: The Takeover mixtape and gaining national recognition with a legendary Funk Flex freestyle. Don made his name as a vital solo artist in the NYC scene with mixtapes like Corner Stories, praised by Stereogum, and raised his profile even further with tapes like 2018’s Don Talk, featuring a guest spot from Pusha T, and the full-length Don Season 2, with features from Lil Durk, 50 Cent, Moneybagg Yo, and more.

Over the past couple of years, Don has been keeping busy with even more high-profile collaborations, recruiting Lil Uzi Vert and A Boogie for “Flood My Wrist” (over 42 million Spotify streams) and joining forces with Benny The Butcher for the Complex-praised single “Legends.” In 2021, Don has continued to feed his loyal fans, sampling a classic NY banger on his single “Law & Order” and reminding fans of his off-the-dome brilliance with his version of Drake’s “Lemon Pepper Freestyle” and recent appearance on Charlie Sloth’s Fire In The Booth session. Stay tuned for much more from Don Q in the build-up to Double Or Nothing.