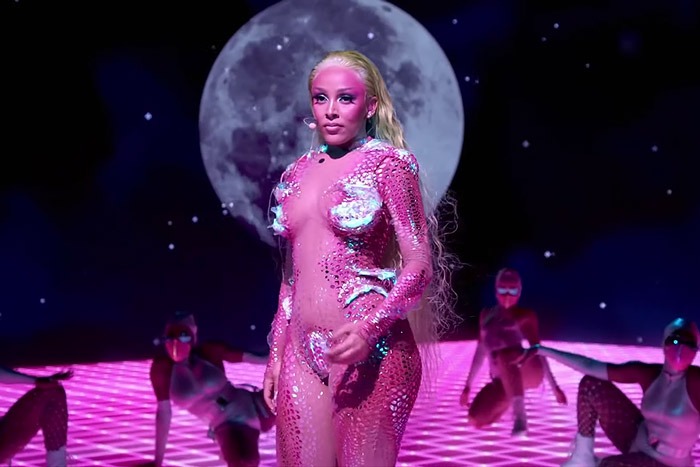 Following performances from The Weeknd, DaBaby, and Lady Gaga, the singer-rapper brought fans into her world while making her VMA debut on Sunday. Doja, playing an MTV News host named “Something Quirkier,” intro’d the out-of-this-world performance.

Donning a futuristic light-up catsuit (complete with glowing crotch), a green-haired Doja opened her dance-heavy set on a planet far, far away. Joined by her masked dancers, she delivered her chart-topping smash “Say So” before launching into her Gucci Mane-assisted hit “Like That,” ending with an epic dance breakdown.

Doja, who was nominated for three Video Music Awards, also went home with her first Moon Person for PUSH Best New Artist. She was overcome with emotion as she thanked her fans and her mother.

“Me on social media is one thing ’cause I will joke and I will meme all day, but when I stand here right now and tell you that I’m so thankful to have you as supporters,” she said. “The fact that this happened and you are a huge part of that means everything to me. And I’m not gonna cry, but I love you and thank you and…stay safe…and thanks mom.”