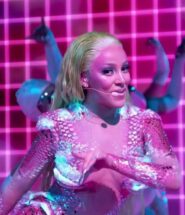 Doja Cat beamed down from some hot pink alien lady planet for her live performance of “Say So” and “Like That” at the 2020 Video Music Awards on Sunday night, and I, for one, welcome our new TikTokina overlordess. Give in to Doja Cat! All! Hail! Her!

Dressed (well, in a sense) in a barely-there pink champagne bodysuit featuring strategically placed light-up gem-encrusted accouterments — looking not unlike what I imagine Britney Spears’s sparkly, regular champagne-colored bodysuit from the 2000 VMAs’ final form would look like — the 21-year-old, Los Angeles-born artist kicked off her 2020 VMAs set with “Say So,” a song about waiting for someone you’re hot for to finally make the first move.

“It’s about when you go somewhere and you see someone and they don’t approach you,” Doja said about “Say So” during an interview with MTV News earlier this year. “But you’re looking at each other and you both feel like there’s something there.”

Remember flirting with people IRL? I hate this pandemic so much!

Anyway, Doja — who was nominated for four awards at tonight’s VMA ceremony including Push Best New Artist, Song of the Year, Best Direction, and Song of the Summer — then switched into “Like That,” which, much like “Say So,” became the hit we know thanks to its viral status on TikTok. As a nod to her two Hot Pink tracks’ social media fame, Doja made sure to do the TikTok dance during one of the choruses in “Say So.”

“It’s really changed my life,” the musician said of her music’s incredible reach on TikTok during a recent interview with YouTube makeup artist James Charles. “I feel like my whole career has become based around it.”

Tonight’s performance of “Say So” and “Like That” mark Doja Cat’s debut performance on the VMA stage. Here’s to many more!