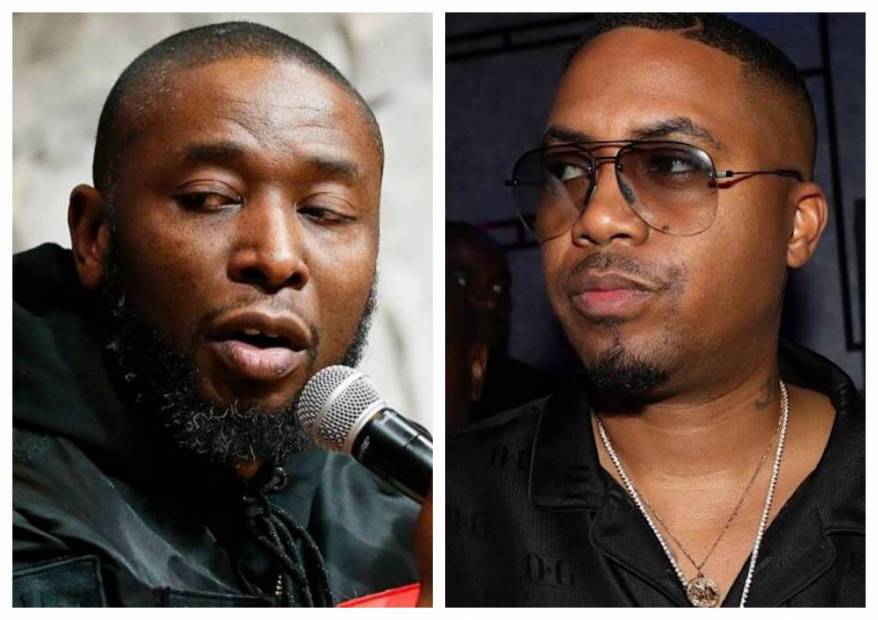 The Recording Academy rolled out the 2021 Grammy Award nominees on Tuesday (November 24) and sparked a contentious debate on social media.

Fans were outraged The Weeknd wasn’t nominated for a single award despite releasing the No. 1 Billboard 200 album After Hours in March and Quality Control CEO Pierre “Pee” Thomas couldn’t believe Lil Baby’s My Turn album didn’t get a nod for Best Rap Album. 50 Cent and Teyana Taylor also took their grievances with the Recording Academy to social media.

Taylor, who wasn’t nominated for her latest project The Album, expressed her outrage in a Twitter post with, “Y’all was better off just saying best MALE R&B ALBUM cause all I see is dick in this category.”

Fiddy’s previous prediction also came true. Last week, he told the Rap Caviar podcast there was no way Pop Smoke’s posthumous debut Shoot For The Stars, Aim For The Moon was getting nominated.

“Best Rap Album,” he said followed by several grinning emojis. “They out of touch this shit ain’t it, get the fuck outta here. 50cent #bransoncognac #lecheminduroi.”

But there was a lot to celebrate too. The Best Rap Album nominees included some welcome surprises for a lot of classic Hip Hop fans, including D Smoke’s Black Habits and Royce Da 5’9’s The Allegory. Other nominees in the Best Rap Album category include Jay Electronica’s A Written Testimony, Nas’ King’s Disease and Freddie Gibbs & The Alchemist’s Alfredo.

Like many other artists, celebrated producer 9th Wonder took notice of the list and applauded all of the nominees — almost. Shortly after the list was unveiled, 9th fired off a tweet congratulating everyone but Nas and The Alchemist, leading some to wonder if 9th has beef with the notorious MC given their history. The Alchemist omission also raised a few eyebrows.

The tweet elicited some passionate responses from Hip Hop fans. As one Twitter user posted, “@9thwonder not only tweeted this but as you can see he put it on his IG page. Mr. Duke University Professor and Grammy board member is wack for this. How do you not mention @alanthechemist who is nominated with #Gibbs. And how do you not mention @nas the elder statesman in the category?

“You know the man that paved the way for you and every artist in this category. Now I see why Q-Tip called you out when the Grammys played Tribe a few years ago. Also, I see why @phontigallo and @rapperbigpooh of #LittleBrother backed away from you as well. Grow up bro and stop being petty and bitter.”

The comment suggests 9th is still bitter about some beats Nas left on the cutting room floor, but the North Carolina beatsmith has yet to address the comment.

While it’s unclear exactly why 9th would choose to leave Nas and Alchemist out of his tweet, it’s important to note 9th and Nas have never completed a collaboration, despite being in close proximity for years. Nas is also noticeably absent from 9th’s Nas remix album God’s Stepson.

During a 2010 interview with Beats, Boxing, Mayhem, 9th revealed the Illmatic legend had selected some of his beats but was unsure if they were going to be used.

“Nas is an anomaly, man,” he said. “He wants to get so far away from Illmatic, and everybody wants him to go back. I think he thinks we’re talking about his subject matter. We’re mostly talking about the sound. Nas is one of the few artists from our generation that’s keeping our generation alive from a mainstream perspective. For a mainstream standpoint it’s Nas and JAY-Z, there’s not too many others like them left.”

“I spoke with him,” he continued. “I was actually in Atlanta when I played beats for him earlier this year. He picked some, [but] it’s a waiting game, brah. Unless they come down to my studio and specifically request me, it’s always a waiting game. People ask me ‘when are you going to work with so and so?’ It’s not when I want to work with this person, it’s when they want to work with me. So Nas is a tough cookie to get to.”

9th Wonder has been a member of the Recording Academy for years — which includes voting duties — and has one nomination under his belt in the Album of the Year category for Kendrick Lamar’s To Pimp A Butterfly.