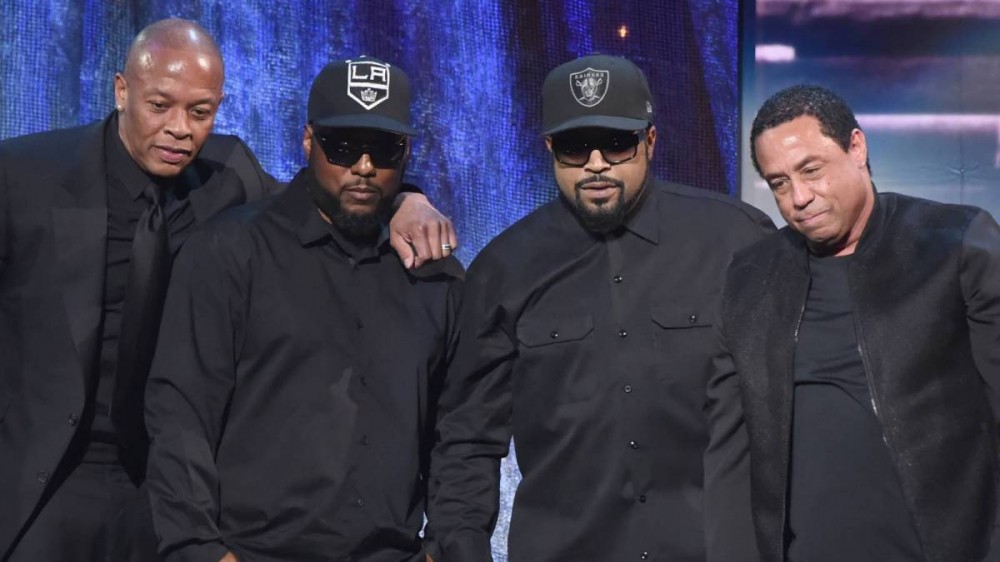 Directed by F. Gary Gray, the movie dove into the tumultuous journeys of Eazy-E, Ice Cube, Dr. Dre, MC Ren and DJ Yella, who set the precedent for West Coast gangsta rap in the late 1980s/early ’90s. But the film was marred by controversy from the beginning.

Roughly two months after its release, N.W.A’s former manager Jerry Heller filed a $112 million lawsuit against NBCUniversal, F. Gary Gray, Legendary Pictures, screenwriters Ice Cube and Dr. Dre as well as the estate of Eazy-E, claiming his depiction was inaccurate and insisting parts were stolen from his autobiography without permission. The suit was ultimately dismissed in December 2018, two years after Heller’s death.

Meanwhile, former Death Row Records CEO Suge Knight was involved in a fatal hit-and-run on set in January 2015 that wound up sending the embattled record executive to prison for 28 years.

Then there was the exclusion of J.J. Fad from the story entirely. The First Ladies of Ruthless Records — MC JB, Sassy C and Baby D — were integral in the label’s success but weren’t even mentioned in the film. The trio gave Dr. Dre and Ruthless Records their first gold certifications from the Recording Industry Association of America (RIAA) and yet, the film failed to even say J.J. Fad’s name.

Singer Michel’le, Dr. Dre’s former fiancée and mother of one of his children, also wasn’t depicted in the film, but she wasn’t surprised, telling VladTV at the time, “Why would Dre put me in it? I mean ’cause if they start from where they start from I was just a quiet girlfriend who got beat up and told to shut up.”

Former Pump It Up! host Dee Barnes, who Dr. Dre brutally attacked at a Hollywood party in 1991, also was left out of the storyline. She later addressed the glaring omission in a Gawker article titled, “Here’s What’s Missing from Straight Outta Compton: Me and the Other Women Dr. Dre Beat Up.”

During a recent interview with HipHopDX, DJ Yella explained why there were so many crucial parts of the Ruthless Records/N.W.A story left out of the film. He sounded especially disheartened J.J. Fad didn’t get the shine they deserved.

“Our first gold single and gold album was by J.J. Fad,” he says. “‘Supersonic’ happened to be the first one. Even though we did the ‘Boyz n Tha Hood’ and a couple of EPs, that’s all we did. But J.J. Fad blew up real fast and then it was nonstop. The gates was open, and they didn’t close until years later. But I understand what they was trying to do. They was trying to get too much into the movie.

“There was already some stuff that got left out. The movie was like 70 percent correct, because it was just too much to pack into that little two hour and 20 minutes. I guess it would have been too much trying to touch on that. A few things that didn’t get touched, but yeah. It’s a shame they didn’t get even mentioned. Even like Bone Thugs-n-Harmony. They sold 10 million records. They only got mentioned by cassette tape.”

But DJ Yella made sure to include J.J. Fad in his new memoir, the aptly titled Straight Outta Compton: My Untold Story. Prior to its release, Yella publicly told MC JB she would get the recognition J.J. Fad rightfully earned over the years.

He says, “I told her she was going to get her props — and she did.”

Throughout the book, DJ Yella dives into the history of N.W.A, the death of Eazy-E, his foray into the adult film business and subsequent journey to God.