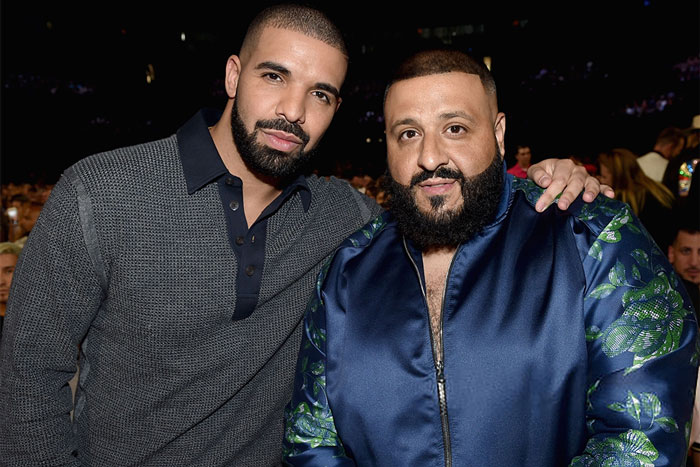 DJ Khaled and Drake are up to something.

Just a day after he and his wife welcomed their second son, the We the Best mogul got right back to work. He hopped a plane to Toronto to link up with the 6 God at his new 35,000-square-foot Toronto mansion.

He also shared video of them playing basketball on Drake’s OVO court. “It was a tie,” he said.

WHEN GREATS CONNECT AND REAL FRIENDS/BROTHERS CONNECT . It’s always GREAT energy ! Key word (GREAT) It was a tie Now please note I had no shoes on @champagnepapi House is so incredible , so I had the ultimate respect and took my shoes off walking through the Embassy . ———————————————— Yes I know I should of brought my sneakers to the court . But the house was so big it would took long time to get back to the court ———————————————— @ivanberrios you got that? Smartest ting you ever did in your whole career . #WETHEBEST #OVO FAMILY TING

During his 24 hours in Toronto, they also managed to find time to hit the studio. “It’s amazing what you can get done in 24 hours. I can’t wait to share these moments and real life Story wit you,” said Khaled before adding “DECADE SECURED” in a subsequent post.

Roc Nation’s Lenny S shared another photo of them in the studio along with more details about their recording sessions. “New Year. New Album,” he said. “The only problem with this session is deciding what monster to leave with!!! Stay Tuned!!!!!! By the way, @champagnepapi niiiiiiiiice house, I mean mansion, I mean estate, I mean, Embassy. Well, you get it.”

Khaled and Drake already have a history of hits. They previously teamed up on songs including “I’m On One,” “No New Friends,” “For Free,” and “To the Max.”

Khaled is taking no days off. In addition to readying the follow-up to last year’s Father of Asahd, he will perform his Grammy-nominated song “Higher” during a tribute to Nipsey Hussle at the 62nd annual Grammy Awards on Sunday (Jan. 26).

! Let’s just start by saying we came to see The Boy straight from the delivery room. (With Nicole’s permission of course. Lol). Baby was born and we jumped on that bird to the 6️⃣. Y’all really think we playing out here?! Yeah, ok. New Year. New Album. You know why my eyes are closed too. Lol. The only problem with this session is deciding what monster to leave with!!! Stay Tuned!!!!!! By the way, @champagnepapi niiiiiiiiice house, I mean mansion, I mean estate, I mean, Embassy. Well, you get it……. @ivanberrios ✈️