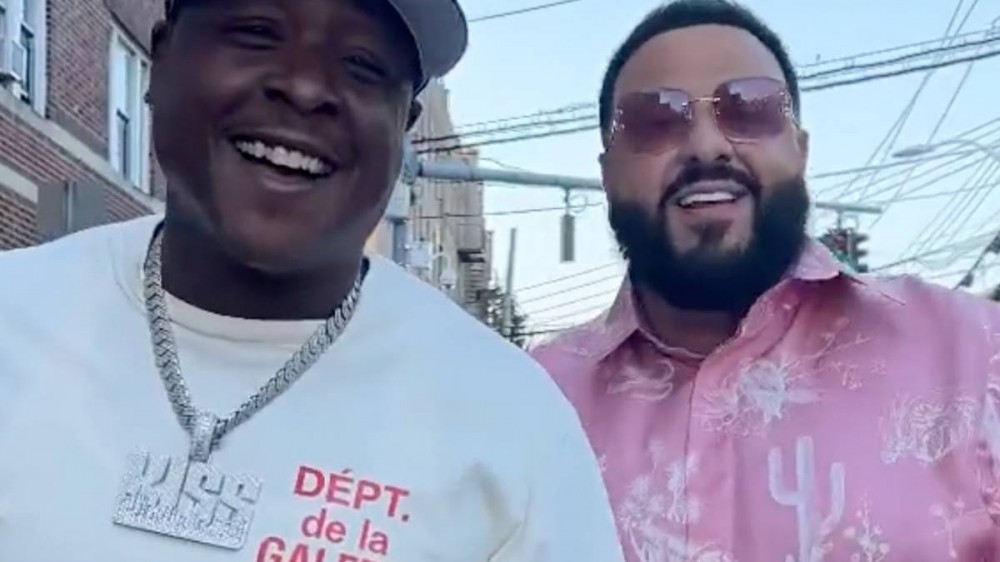 Yonkers, NY – DJ Khaled shut down a couple of streets in Yonkers, New York this week in order to direct a music video for “Jadakiss Interlude” starring The LOX rapper himself.

On Monday (August 29), the decorated producer posted a video clip of the shoot to his Instagram account and added in the caption: “@jadakiss DID!! GOD DID!!,” a nod to his latest album GOD DID.

The album is expected to debut at No. 1 on the Billboard 200 with roughly 100,000 to 105,000 total album equivalent units sold in its first week. His only competition is Bad Bunny whose Un Verano Sin Ti album has been in the No. 1 spot for the past nine weeks.

DJ Khaled likely doesn’t want to settle for anything less than a No. 1. His previous album, Khaled Khaled, debuted in the coveted spot last year with over 93,000 total album-equivalent units sold in its first week.

However, his 2019 album Father Of Ashad was bested by Tyler, The Creator’s Grammy Award-winning album IGOR, which Khaled wasn’t happy about. In a since deleted Instagram post, he proceeded to rant about his No. 2 position.

He added: “It’s called albums that you actually hear the songs. Not no mysterious shit, and you never hear it.”

Many perceived the “mysterious shit” to be a jab at Tyler. But, as usual, the Odd Future alum was unbothered and instead, had a little fun at DJ Khaled’s expense. Shortly after Khaled’s tirade, he took a few subtle jabs at his comments on a post from Akademiks who was taking a poll on who had the better album — Tyler or Khaled.

Tyler, The Creator answered: “who tf listens to tyler the creator?” and followed up with, “HIS MSG SHOW SOLD OUT BUT FR I HAVE NEVER HEARD A TYLER SONG IN MY LIFE.”

Tyler further addressed the controversy during an August 2021 interview with Hot 97, saying: “Bro that Khaled thing was like, it was fun, it was just watching a man die inside. The weirdo was winning, I was moonwalking in a wig. This n-gga had everyone on his album. Everyone. That n-gga ego was deflated, he’ll probably never admit [it].

“I didn’t say nothing, I just let that No. 1 speak. N-gga’s ego had to deal with that because his whole identity is being No. 1. And when he didn’t get that, that sat with him longer in real-life time than that moment.”

Check out more videos from the DJ Khaled and Jadakiss video shoot below: