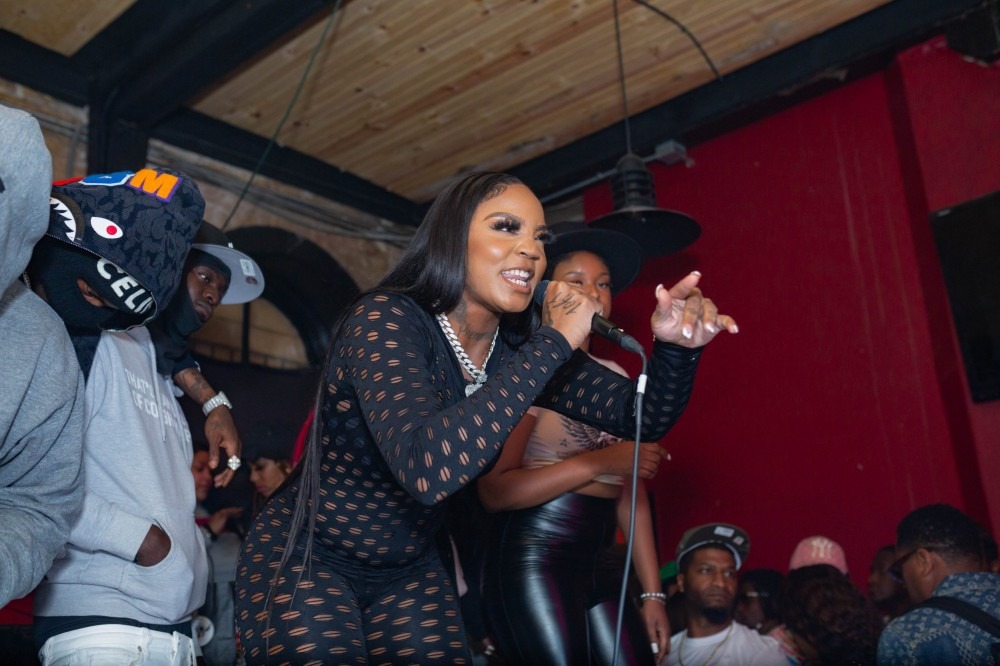 The return of SxSw, might have taken place during the Spring, but on March 18th, in Austin, Texas it was Holiday season! The legendary Hip Hop DJ helped to capture the essence of what SxSw music festival in Austin is all about with his Hollipalooza stage powered by Kim SoMajor, The Umbrella Firm and The Source Magazine.

“The Hollipalooza event was everything you could ask for,” said the Atlanta artist Atmore VI, who debuted an unreleased song he has featuring Bad Bunny called “Passport.” Atmore VI shared, “Hot artists from the past, present, and future all showing love and performing some great music.”

Hollipalooza not only provided the entertainment with big named artists like Trae The Truth, Sally Sossa, Domani, K Shiday, Rob49 and Beat King, it also gave independent artists a time to shine.

“I don’t think they understand,” said Holiday as he introduced his special guest. “I brought some very important people here.”

Along with himself, The Source, and other media outlets in the building, Kim SoMajor and Holiday also brought out Josh “J1” Raiford to help new artist set up their own unique stations as a way to reach those larger audiences. Raiford is the VP of music programming at Pandora.

Attendees felt that the Hollipalooza stage powered by Kim SoMajor and The Umbrella Firm was a great opportunity for them to grow as an artist.

“My Hollipalooza experience was mad lit and definitely one to remember,” said the Georgia native Big Legend who performed” Money Habits.”

He continued to speak on how he took advantage of the mass amount of people present for the event, “I networked with a lot of artists and industry executives, along with making a lot of new fans.”

Rising artist out of South Memphis, Tripstar, loved the enthusiasm of the attendees. Being the next big thing out of Memphis, Trip wanted to know how others felt about his music and said he received a great response.

“I really like how everybody was very supportive and had great energy in the crowd,” said Tripstar, the latest signee to Moneybagg Yo.

PGF Shawt, another artist from Atlanta, said The Source was his favorite magazine growing up and loved the fact that he got a chance to perform with them in the building.

“Just being able to be a part of The Source is big,” said Shawt. “It’s a pleasure and honor truly appreciated. Right now, fans can check out PGF Shawt’s new single “Confessions” on all music platforms.

A lot of the performing acts recognized the prominence of DJ Holiday and they all felt honored for the opportunity to showcase their talents in front of him on a big stage.

Atmore VI added, “DJ Holiday is an OG we all grew up listening to, and his down-to-earth demeanor shows you he really does this for the love.”

The Hip Hop duo from St. Petersburg, Florida, Yo Simi, and Dredlock Esoc second that thought when it comes to the persona of DJ Holiday.

“DJ Holiday was a solid dude I got a chance to meet him at the show and after I performed, we chopped it up,” said Dredloc Esco, half of the duo who performed “Vegas.”

FeVaOG also loved the fact that DJ Holiday was down to earth.

“DJ Holiday showed me love and was laid back, so I look forward to working with him,” said the Jersey artist who got the crowd lit with his hit “Casamigos”.

Hollipalooza wasn’t your basic open mic showcase. Along with great networking, The Umbrella Firm offered a single record distribution deal via Beatroot Music to one of the nights top performers. Congratulations are in order to PGF Shawt who won the distribution deal.

Woodrow, CEO of The Umbrella Firm, shared that Shawt’s performance stood out as the “total package.” He said, “Shawt showed he has great music with substance and flow patterns which is rare. Artists usually are one or the other. He’s invested in his career and he has a track record of already having collaborations with other artists and uploading to major platforms.”

“Overall, he has a heavy promotional campaign so he came correct and participated while other artists were performing. That showed humility but he was one of the most dominant independents we had. Looking forward to working with him,” Woodrow shared.

The event also featured a live activation with Atlanta’s own Scotty ATL. He showed some major fan appreciation. Being the new King of Grillz, Scotty gifted out two 6-piece grills to the audience, just for attending the Hollipalooza event. Scotty’s grill company, Grillz By Scotty, provided the grills exclusively done onsite.

“We just wanted to show love, said Scotty ATL, who didn’t perform but brought his artist Just Call Me Veto to the music event.

Under the Cool Club label, Just Call Me Veto introduced himself with his new single “One Of Them Ones.” This was his first Austin performance and the New Orleans-born, but Atlanta-raised artist didn’t take it lightly.

“This is major,” said Veto. “In 2014 I was just walking around. I always wanted to do a show here and now I had three. Shout out to DJ Holiday, Scotty, Kim SoMajor, and The Source. This is major.”

There was a ton of fresh faces in the building for Hollipalooza. Check out a list of some of the new faces of Hip Hop to keep on your radar.