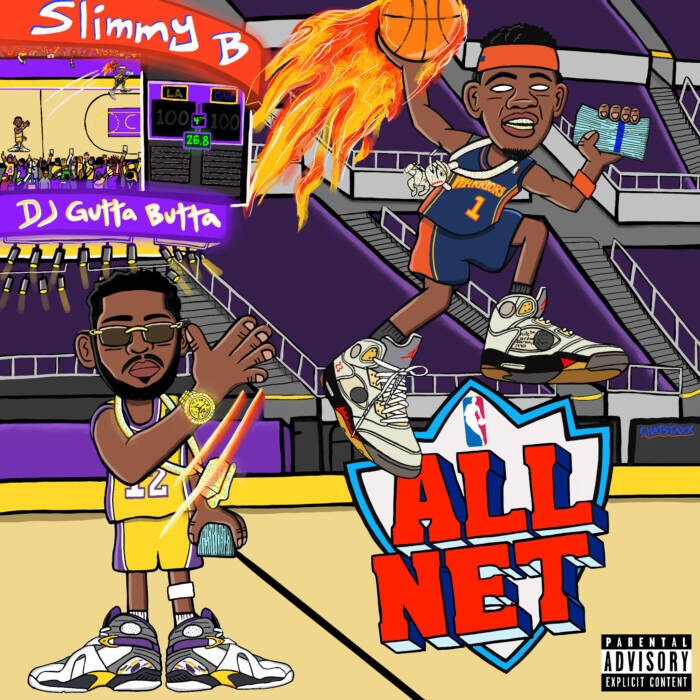 Hailing from Vallejo, California DJ Gutta Butta and the former SOB x RBE emcee Slimmy B are quintessential Bay Area figures, focused on securing the bag above all else. Connecting with two more NorCal all-stars, Gutta Butta and Slimmy share “Bag Time,” their new video. A piano-led anthem about enjoying life’s finer things, “Bag Time” gets its power from the contrast between the melodic stylings of San Francisco’s Lil Bean, the smoothly lilting flow of Stockton’s MBNel, and the neck-snapping attack of Slimmy B. In the video, directed by Skiimob and hosted on the ABOVE ALL YouTube channel, the four artists don their favorite basketball jerseys (a lot of Kobe love) as they mob out in a secluded Berkley warehouse. “Bag Time” is a highlight track from All Net, the new collaborative EP by DJ Gutta Butta and Slimmy B, and the second video following “Sh*t Talking” ft. Icewear Vezzo.

Compiling six new songs that run the street rap spectrum, All Net gets its power from Slimmy B’s breakneck, against-the-beat flow and his casually flossy flexes. A&R’d by Gutta Butta, a Bay Area music scene jack-of-all-trades, the new EP teams Slimmy with a variety of the rawest rappers in the Bay Area, including Slimmy’s ex-SOB x RBE brother DaBoii and rising melodic rappers Lil Bean and MBNel. Gutta Butta also connects Slimmy with two Detroit all-stars, bringing in Icewear Vezzo for recent single “Sh*t Talking” and Bandgang Lonnie Bands for the fiery “No Passes.” Though Slimmy loves the Warriors and Gutta Butta pledges allegiance to the Lakers (RIP Kobe), the two make a perfect tag team on the new EP. All Net is available to stream on all platforms via Purple Lane Ent.

A renaissance man with ventures in many aspects of the music industry, Vallejo native DJ Gutta Butta a crucial role in the Bay Area rap scene. Known for his signature #YesYes DJ drop, he’s most prominently a DJ and mixtape host, using his connections to put together tapes for artists like Benny and Salsalino, generating millions of streams and getting radio spins on KMEL for hits like Benny’s “Weekend.” He’s also an experienced concert promoter, putting on shows in the Bay for artists like Nef The Pharaoh, Cuban Doll, Icewear Vezzo, and OMB Peezy. When he’s not making moves in the music world, Gutta Butta spends his time breeding American and French bulldogs.

Gutta Butta first connected with Slimmy B for the 2017 single “U Ain’t Ready,” a local favorite slap in the Bay, and they’ve been friends ever since. With All Net, the DJ/rapper duo looks to make waves in the Bay and beyond. In an exclusive interview with HipHopSince1987.com, they talk more about linking up to record this classic EP. In the interview, they talk about coming out of the bay area and starting a movement that now has a half-billion views on youtube and is still growing. They talk about the importance of being authentic and true to yourself and being motivated by positive feedback.