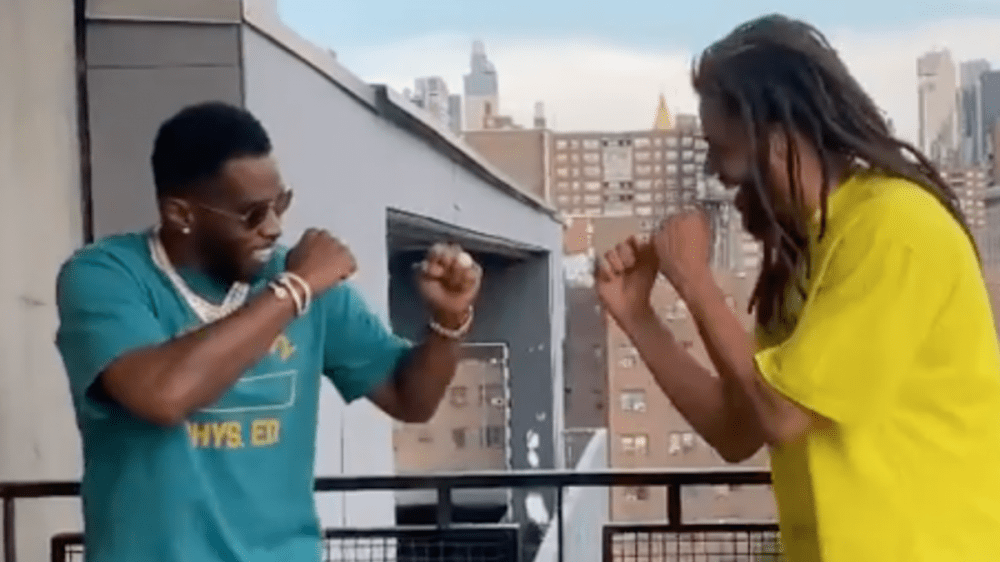 Diddy and J. Cole may have gotten into an altercation at an MTV Video Music Awards after-party in 2013, but it’s clear there’s no hard feelings all these years later.

The Bad Boy Records boss took to Instagram on Wednesday (June 9) to share a video of him and J. Cole hilariously squaring up with each other on a balcony. The pair went outside to pose for a photo together when Cole caught him off guard him by getting into a fighting position.

Both Diddy and J. Cole laughed about the incident and clenched fists while staring each other down.

J. Cole recently addressed the fight between him and Diddy on his The Off-Season track “Let Go My Hand.”

“My last scrap was with Puff Daddy, who would’ve thought it?” he raps on the song. “I bought that n-gga album in seventh grade and played it so much/You would’ve thought my favorite rapper was Puff/Back then I ain’t know shit, now I know too much.”

Diddy also appeared on the outro, saying, “Lord, please guide our steps. Watch us, cover us, so that every move we make is in alignment with your will, your purpose. Please fill us with your spirit. Keep us forever in the present, for presence makes the strongest fathers. Teach us how to lead, show us how to love.”

In May, J. Cole’s manager and Dreamville Records co-founder Ibrahim “IB” Hamad went into detail about the incident on an episode of the Say Less podcast.

“It was definitely not like he was defending Kendrick or something,” he said. “It wasn’t like, ‘Don’t talk to Kendrick like that!’ Kendrick was there, Top was there, [JAY-Z] was there, Beyoncé was there. Me and Cole. You know, grown men got a little heated. All I remember is, me and [JAY-Z] looking at each other like, ‘Oh, these n-ggas ‘bout to fight.’ And then just being like, ‘Oh no this is ‘bout to happen.’ I’ll leave it at that.”

He continued, “You wanna know the funny part? That was a VMA party, everyone was there. Angela Yee was literally at the table. I fuck with Yee, but she got Rumor Report and shit. Walking out of there I’m like, ‘Oh this about to be baaad.’ But for some reason no one had a camera out, a couple people was talking about it, but you know.”