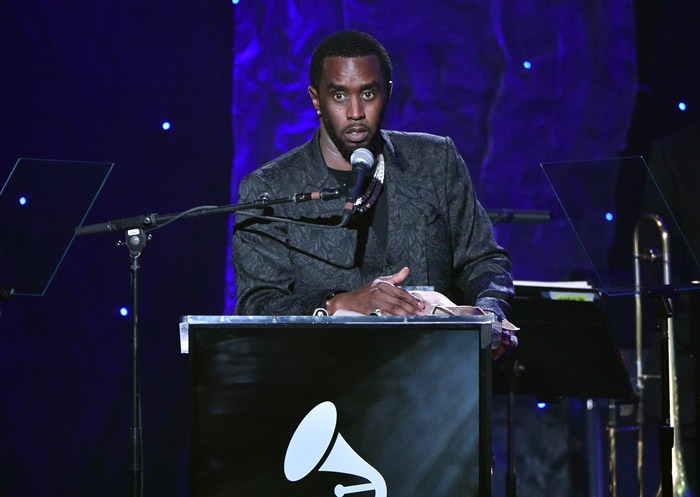 Diddy takes on the Grammys.

On the evening before the 62nd annual ceremony, Sean “Diddy” Combs was honored with the 2020 Grammy Salute to Industry Icons award at the Recording Academy and Clive Davis Pre-Grammy Gala in Beverly Hills on Saturday night (Jan. 25). During his nearly hour-long speech, he addressed the “elephant in the room,” the Recording Academy’s lack of recognition for hip-hop and black music.

“I have to be honest. The last few days I’ve been conflicted. I’m being honored by this industry I love, this family that I love, but there’s an elephant in the room and it’s not just about the Grammys,” he said. “This is discrimination and injustice everywhere at an all-time high. But there’s something I need to say to the Grammys and I changed my middle name to Love, so it’s Sean Love Combs now… So I say this with love to the Grammys ’cause you really need to know this. Every year, y’all be killing us, man. I’m talking about the pain. I’m speaking for all the artists here, the producers, the executives. The amount of time that it takes to make these records, to pour your heart out into it and you just want an even playing field. In the great words of Erykah Badu, ‘We are artists and we are sensitive about our shit. We are passionate.’”

He delivered an ultimatum, calling for change by the 2021 Grammys. “I’m officially starting the clock. Y’all got 365 days to get this shit together… We need the artists to take back the control. We need transparency. We need diversity. This is the room that has the power to make the change. It needs to be made. They have to make the changes for us.”

Diddy calls out the #GRAMMYs at the Recording Academy and Clive Davis’ #PreGrammyGala:

Diddy also acknowledged his friends in the industry who were in attendance including Nas, Naomi Campbell, Usher, JAY-Z, and Beyoncé. “Beyoncé, I call her King Beyoncé. Everybody all know that’s like my superhero right there,” said Puff as Bey looked on. “You know when I watch her and she goes and I think I’m working hard? Nah, nah. I’m not working hard like that. She pushes me and she’s been a sister to me, and I thank you.”

He ended by dedicating his award to iconic albums from black artists that never won the Album of the Year Grammy. “And I want to dedicate this award to Michael Jackson for Off the Wall, Prince for 1999, Beyoncé for LEMONADE, Missy Elliott for Da Real World, Snoop Dogg for Doggy Style, Kanye West for Graduation, and Nas for Illmatic.”

The 50-year-old mogul received a video tribute from Mary J. Blige, L.A. Reid, Lyor Cohen, Andre Harrell, and Jimmy Iovine, along with a Bad Boy performance from Faith Evans, Carl Thomas, Ma$e, Lil’ Kim, and his son, Christian. “Right now, I’m truly present, and it feels like a dream,” said Puff. “I’m going to be up here for a second because, also, I follow in the footsteps of Clive Davis. So everyone can sit down and relax. I don’t want your feet to hurt, but it’s a lot of people to thank. But, this dream has become a reality, so I’m going to take my motherf**king time.”

After Diddy ended his speech around 12:30 a.m., Clive Davis returned to the stage to present a surprise honor to Janet Jackson. The pop icon received a musical tribute from Oscar-nominated actress Cynthia Erivo, who performed “Together Again” and “Love Will Never Do.”

“When I was getting dressed this evening, I thought about it, and I said to myself, ‘I’ve been in this industry for 47 years.’ That’s a long time and I still enjoy going to work and I feel very blessed to still have my journey ahead of me,” said Janet, who also shouted out her 3-year-old son Eissa. “Mama loves you, Eissa.”