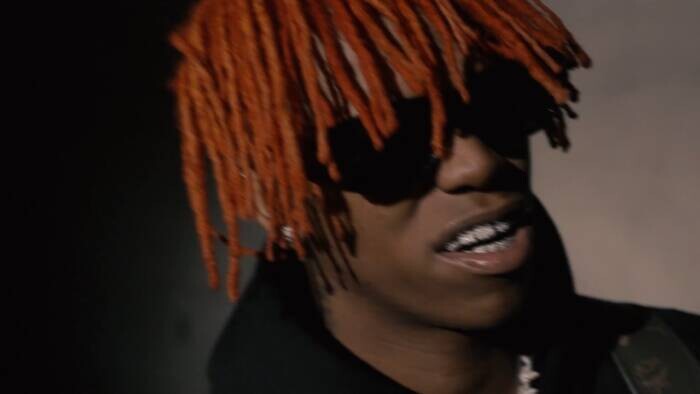 DC The Don combines pop-punk melodies, rage-friendly sonics, and hard-nosed spitting into a blend that is uniquely his own. Sharing the latest missive from his mischievous, red-haired alter ego DONNY, DC The Don shares “Telfar…,” his new music video. Produced by DJ Kidd, whose single-note piano bass adds a menacing, trap-style edge to the apocalyptic production, “Telfar…” finds the 22-year-old rapper eschewing melody in favor of hard-nosed raps, spitting rapid-fire as he talks his smack: “I made it first boy, you motherf*ckin’ counterfeit/Watch how I flex when that f*ckin’ deposit hit/I want a lot, but I still got a lot of sh*t/Choppa gon’ sing on some f*ckin’ melodic sh*t.” In the video, directed by 713Bran, DONNY wears a sweater that bears the MOW3 logo as he stalks an abandoned train station amidst flashing lights.

Arriving in the wake of “Diamonds & Rubies,” “Telfar…” is the latest video from My Own Worst Enemy,, DC’s ambitious concept album. My Own Worst Enemy tells a loose narrative about the Rostrum Records signee’s inner conflict, which manifests as a battle between two distinct personalities: RAG3 KIDD, who represents the artist’s more wholesome and romantic side, and DONNY, a demonic, red-haired spitter who emerges on the album’s harder-edged beats. The album kicks off in DONNY mode, featuring some of DC’s hardest tracks to date, including the massive “ENEMIES,” with a beat that sounds like a malfunctioning supercomputer, and the devilish “MAKAVELI,” a fiery lyrical exercise. As the tracklist progresses, RAG3 KIDD makes his presence felt, emoting over candy-coated production on pop culture-referencing tracks like “iCarly :/,” “Scott Pilgrim,” and “Futurama 2099.”

Blending elements of rap, pop-punk, hyper pop, and more, My Own Worst Enemy both expands and refines DC’s sound, allowing the 22-year-old rapper to showcase every facet of his wide-ranging vocal ability. With production by heavy-hitters like JetsonMade, Starboy, Supah Mario, Trademark Charlie Heat, Astroboy, and more, who deliver DC some of their most adventurous beats, MOW3 percolates with the energy of a young artist testing the limits of what he’s capable of accomplishing–and having fun while doing it.

With over 50 million streams since its release earlier this year, My Own Worst Enemy is available everywhere via Rostrum Records.