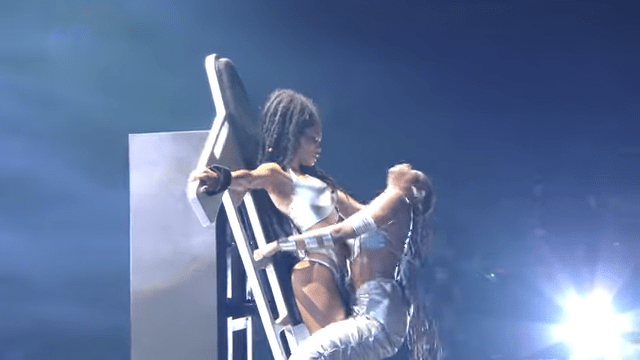 With the 2021 MTV Music Video Awards airing this past weekend, the award show audience is still cooling off from an exciting show. Aside from Chloe Bailey’s solo debut, Normani also had the people talking about her lusty performance to her single, “Wildside.”

While paying homage to Janet Jackson, Normani brought out Teyana Taylor, strapped to a bondage board as Normani began giving her a sensual dance. While some fans were here for it, others, including Barstool’s Dave Portnoy, seemed to think of the performance as a double standard.

“I just want people to know, this is on VH1 right now, just like cable TV, anyone can watch this,” Portnoy said in a post. “People say Barstool’s too raunchy, like, that, you know, we’re sexist, chauvinist pigs, can’t let people see it, too over the top, smoke shows, but this girl, who’s getting like face f—ed, and scissoring, right now just on VH1, this is cool.”

In the past, Barstool has faced many accusations regarding misogyny, cyberbullying, and sexual harassment. In 2021 Portnoy was allegedly under fire after he made some insensitive comments regarding rape. ” [E]ven though I never condone rape if you’re a size 6 and you’re wearing skinny jeans you kind of deserve to be raped, right?”

Check out a clip of Normani’s steamy performance below.