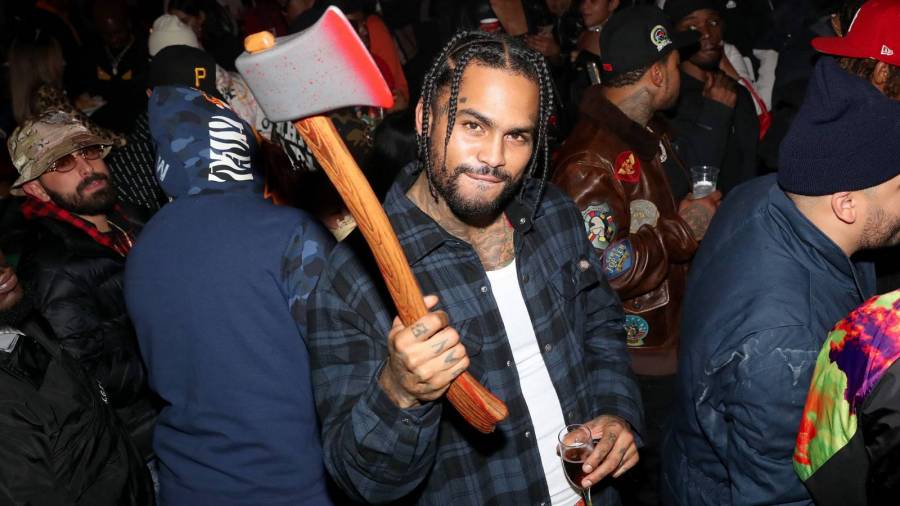 “What’s up with Big Worm?” seemed to be a burning questions on the minds of every Smoke Champs podcast host when sitting down with Dave East. The second episode of the N.O.R.E. and DJ EFN-sanctioned Drink Champs spin-off found the Harlem MC puffing on blunts and sipping on a red Solo cup as he juggled a bevy of topics, including — yep! — Big Worm.

Big Worm, of course, was the drug dealin’, hair roller wearin’ character in the 1995 cult classic Friday played by actor Faizon Love. Outside of acting, Love caused some controversy in November 2020 when accused East of being a “fake Crip.” Naturally, Smoke Champs wanted to know where the animosity began – but even East doesn’t really have an answer.

“I ain’t gonna front,” he begins. “I asked the bro, like I don’t know if I hit one of his joints. I don’t what I did. I don’t think he even got no bitches for me to hit. But my whole thing is like I never met you. This is my whole thing — like respect, bro. I ain’t got no problems with Big Worm. I’m not even gonna say his real name. Like you Big Worm at the end of the day. That’s all n-ggas know you by. I never met you. I never spoke to you. Never seen you.

“I only seen you on Friday as a kid, and n-ggas fucked with you. I was a fan, like I liked your role in Friday. I was a fan of that. N-gga woke up one day and said, ‘Dave East ain’t no real Crip.’ Who told you that? You went and sat around and gave you that vibe?”

When one of the hosts mentions witnessing Dave East in Los Angeles chilling with the Crips, East replies, “I don’t pay to do nothing. This is just me. I move how I move. I got family where I got family. I don’t have nothing to prove to a soul. I’ll be 33 in June. I’m grown fucking man. Who I got to prove something to? If you don’t believe it, you don’t believe it. If you know, you know.”

East also confirmed Love’s comments were completely out of left field and refused to say anything negative about him.

“Never spoke to him in my life,” he added. “But that happened a few times with a few people. N-ggas wake up with me on they mind. But I’m like, ‘Damn, Big Worm? I fucked with you, bro.’ I watched ‘Friday’ all the time. C’mon, man. Shout out to him though. I’m a firm believer in good energy, positive vibes. I’ll see him when I see him and however that go, that go. It’s a small world.

“But I’m not going to badmouth that man on no podcast, no camera, no nothing.  I don’t know why he had my name in his mouth. Shout out to him.”

Faizon Love also called out MC Eiht for working with East during the same interview, prompting the Compton’s Most Wanted rapper to tell HipHopDX at the time, “He ain’t called out Snoop [Dogg] or J Stone who also has songs and videos with my n-gga [laughs]. I guess I’m the lil n-gga so it’s all good. I did a song with an artist and a homie, period, verifying his gang affiliation is my now job? My n-gga J Stone and Snoop fuck with Dave, but I’m the one getting called out. Now that’s comedy for you [laughs].”

He added, “I’m on the song too and I got super respect and love for the homie Dave East. Faizon, I have no clue where you from or what gave you the right to speak like that to a legend. I didn’t hear that when the homie Snoop or J Stone got down with the Harlem homie. I suggests you stay outta Crips’ business.”