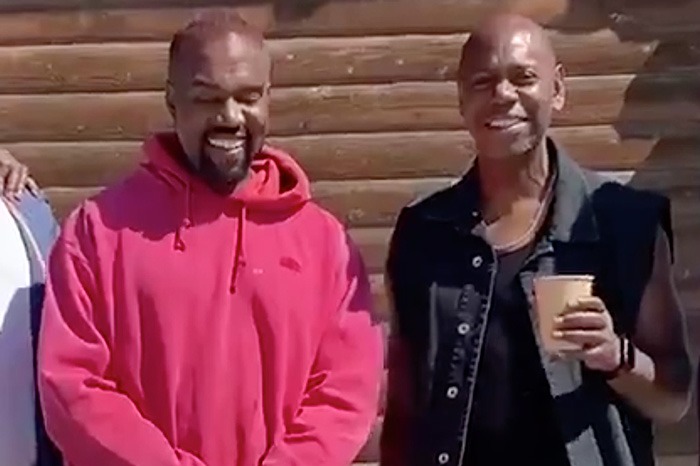 Kanye West is getting by with a little help from his friend Dave Chappelle.

The comedian rushed to Kanye’s side to check in on him following his Twitter meltdown. On Tuesday, Ye tweeted a video of Dave at his ranch in Cody, Wyoming, less than 24 hours after Kim Kardashian allegedly tried to fly to him with a doctor and have him committed to a mental hospital.

“THANK YOU DAVE FOR HOPPING ON A JET TO COME SEE ME DOING WELL DAVE YOU ARE A GOD SEND AND A TRUE FRIEND ALL LOVE,” tweeted a grateful Ye.

In the clip, Kanye asks Dave to say something to make him smile. “We need some joy, we need to smile,” he says, while Dave responds, “Brotherhood is real. Love is real.”

THANK YOU DAVE FOR HOPPING ON A JET TO COME SEE ME DOING WELL DAVE YOU ARE A GOD SEND AND A TRUE FRIEND ALL LOVE 🕊 pic.twitter.com/ddLA0E9eLK

Kanye then asks him to tell a joke, “something to lift our spirits.” Dave says he is still on his first cup of coffee and needs time to come up with a good joke. “Uplifting joke? You know I don’t write them!” he says.

They share some laughs and a hug before Kanye tells Dave, “I love you, bro. Thanks for coming out and checking on me.”

On Monday evening, Kanye sent out a series of disconcerting tweets where he called out his wife and mother-in-law, Kris Jenner. “Kim tried to bring a doctor to lock me up with a doctor,” he tweeted. “If I get locked up like Mandela… Ya’ll will know why.”

He also compared his life to the movie Get Out. “Everybody knows the movie get out is about me,” added Ye.

A source tells PEOPLE that Kim “has been trying to get Kanye help for weeks,” but he has refused it. “But what do you do when a person doesn’t want help?” the source says. “Kanye is in Cody because he doesn’t want help. If he wanted help, he would come back to L.A.”