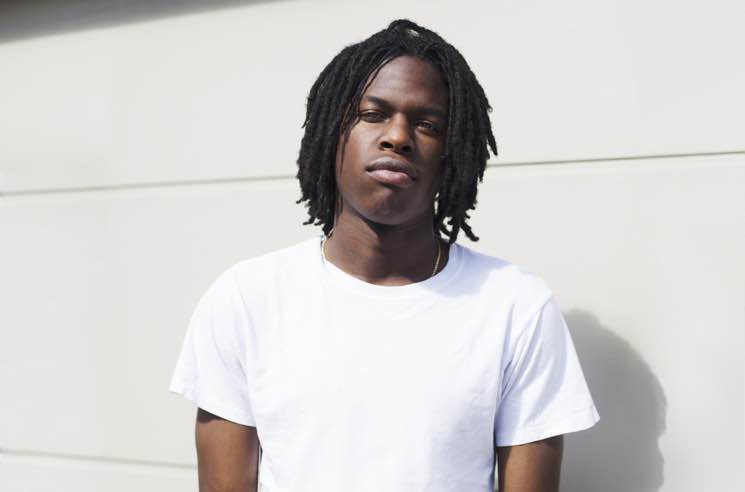 “You can’t reminisce too much. Because you’ve got to keep pushing forward, you know?”

Daniel Caesar is being modest. Looking back, the vocalist, songwriter and musician had a 2017 to kill for, especially for an R&B/soul artist from Canada. His debut full-length, the elliptically magical Freudian, surpassed expectations with its gospel-infused sound and swagger. His star-making appearances on the American television talk show circuit — including The Late Late Show With James Corden and a timely team-up with Chance the Rapper on The Late Show With Stephen Colbert — solidified his presence and stature Stateside. Freudian single “Get You” has already amassed over 56 million streams on Apple Music and another 55 million on Spotify when you include his catalogue to date.

And with an unprecedented North American and European tour that’s seen an added second show in Vancouver and five consecutive sold-out Toronto shows in December — even more impressive as an independent artist with next to no airplay on Canadian radio — it’s safe to say that Caesar has made an impact.

Not bad for a quiet, introverted 22-year old from Oshawa, ON (born Ashton Simmonds), who was kicked out his home after a fight with his father and decided to head to Toronto to make it as an artist. It was a dream that wasn’t easy to realize — no dreams are — as he worked dead-end dishwashing jobs and lived virtually homeless, sleeping on friends’ couches and on Toronto park benches on occasion. Those days are gone. “There were low points,” Caesar says, including times being broke and wondering if things were going to work out. “And I know that I could go back home, if it really came down to that.”

“You’ve got to build a base,” says Caesar, who now resides in the tony Toronto neighbourhood Rosedale. “Although I have my sights set globally, I’m from Canada. My team and I are] very aware trying to keep an ear to everything new. Because down the line, when no one cares anymore, that’s when Canada supports you and holds you down.

“It was kind like, this is our moment. We knew that if we put out a subpar project, we could lose all the momentum. And Freudian] is doing well. I think it’s doing better than we thought.”

He’s being modest, again. With names like Chris Martin, Liam Gallagher, Mary J. Blige, Stevie Wonder and Rick Rubin singing his praises, loss support is nowhere near his radar. Speaking praise, it’s his religious background — the second eldest son Hollace and Norwill Simmonds comes from a deeply religious family Seventh Day Adventists who do not listen to or support secular music — that has informed his gospel-infused sound.

Contextually, his music, a confident fusion soul, pop and rock, represents a thematic ouroboros requited and unrequited love, sex, longing, spirituality and belonging — almost as if the lapsed churchgoer is experiencing a crisis faith. His own father is an accomplished gospel singer, but bad industry experiences led him to not want his children anywhere near it. Caesar wanted otherwise. Getting kicked out his Christian private school in Oshawa for selling a couple grams weed and leaving home to make the music he wanted to make, has led him to this point.

While he and his faith-based parents and family are cool these days, his outsider views on the church, “spiritual but not religious,” holistically define his interior life and musical approach. “We don’t even really talk about that stuff anymore. It’s not their focus,” he says his current life decisions and chosen career outside the church.

“It’s chill. I’m mostly just catching up with my three] brothers, seeing what they’ve been up to. These days, it’s more like me coming from playing a show and feeling the high from all the energies directed at me, to feeling a bit weird when I go home to the place where people know me from before all that,” he says.

Mixed and recorded in Toronto, the fiercely independent Freudian is big — building f previous EP efforts Birds Paradise, Praise Break and Pilgrim’s Paradise — and has set the foundation. Grounded yet elevated, the album fosters a classic, keys- and guitar-based approach, while his vocals, a smooth and evolving mastery sound and timbre, dip across church harmonies and phrasing to deliver a sound that’s all his own. Caesar eschews the dark and gloomy alt-R&B sound à la the Weeknd; he’s focused on a sound that’s no less anxious, but more fixated on traditional soul sounds. A willingness to show vulnerability in his music has been a key to his success.

“I think it just feels the best to me,” he says. “I just kind realize that people react the best when you put yourself out there like that. It’s the highest risk. It’s quite masochistic in a way. It’s like I’m presenting myself, saying, ‘Do your worst to me.’ But that’s the highest reward, because I think the things that I feel are all things that everybody feels, but don’t want to say. It trips me out sometimes — the things I say sometimes aren’t cool or sexy to me, but girls find it cool and sexy.”

Caesar cites names like Frank Ocean and the Weeknd for inspiring his success, but he is ultimately his own man, with his own established sound and modus operandi. He’s not about fitting in. Credit Caesar’s success to his close-knit Golden Child Recordings team — including producers Jordan Evans and Matthew Burnett — who have set sights on global domination without major label support. Betting on himself led him and his team to this point, even though they came close to signing with a major. They are holding f, for now, as they like the view from here.  “It’s a blessing and a curse. There’s so much bureaucracy. It’s almost like Canada keeps losing its talents to the States,” he ponders. “It’s like all the biggest acts out Canada right now aren’t signed to Canadian labels.”

Newfound success, Caesar says, “hasn’t gotten that crazy yet. I can do what I want, when I want. I want to go to this place, I pick up and go. It’s nice. I’ve just never been inclined to do anything that’s too crazy,” he says. “But I still have to work, you know. Some days I don’t feel like going to the studio. But I still have to,” he says.

“Whatever happens, happens,” he says his current spiritual outlook. “I can’t be living in fear. I did that for so long.”