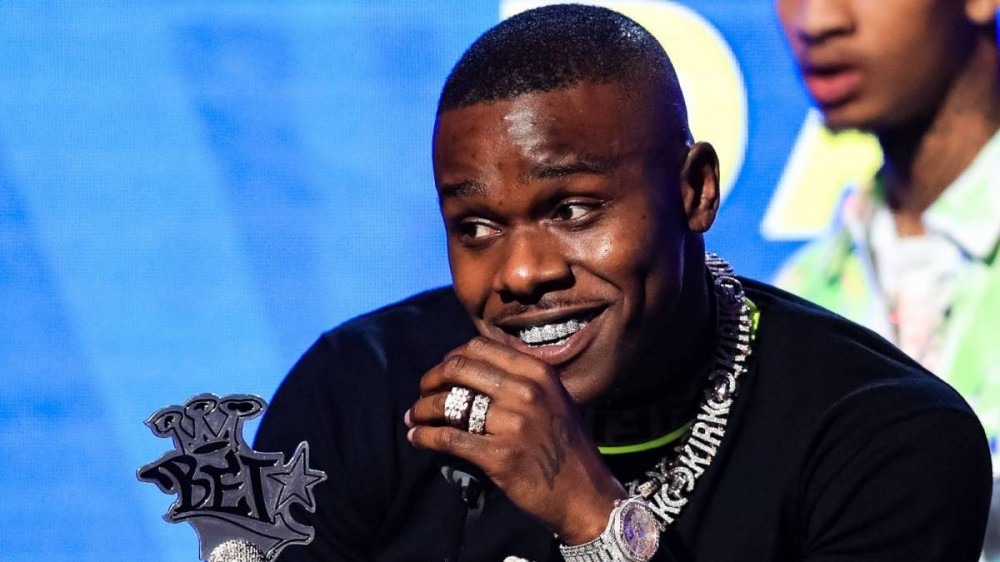 New York, NY – DaBaby’s run-in with two young kids trying to sell Skittles and Gushers for charity has exploded into a Twitter debate. On Monday (June 12), DaBaby was in New York City following an appearance at the ESPY Awards when he jumped out of his Mercedes Sprinter van with a large wad of cash and asked how much they were charging for the candy.

“How much for the whole box?” DaBaby asks to which the young man replies, “$200,” despite each unit being only $2 apiece.

After a little chuckle, DaBaby asks the other boy how much he wanted for his box of Gushers and gets the same answer.

DaBaby ultimately gave them roughly $4 for some Gushers and drove away.

But some people on Twitter took issue with DaBaby’s treatment of the two young men, condemning the KIRK rap star for not giving them more of a chance to succeed.

As one Twitter user wrote, ‘Why would you as a Black man go and violate two Black boys selling snacks on the street? You’re supposed to give them some change and tell them to keep the snacks so they can hold on to more inventory. DaBaby is a fucking bozo and I want the worst for him.”

Another said, “Y’all talk about let black kids be kids, but don’t kids lie here and there, joke around, play, test their boundaries? Why are you crucifying literal children over $200 that means nothing to Dababy. Why can you not contextualize this, y’all aren’t millionaires. It’s getting weird

Why would you as a black man go and violate two black boys selling snacks on the street? You’re supposed to give them some change and tell them to keep the snacks so they can hold onto more inventory. Dababy is a fucking bozo I want the worst for him pic.twitter.com/HKVcbguLxb

Others drew parallels to Meek Mill’s situation with a few Atlanta kids who were trying to hustle bottles of water on the street. Last December, Meek pulled up in a $400,000 car wearing flashy jewelry and told six kids to split $20, which didn’t sit right with people either.

“Between DaBaby & Meek Mill..I am tired of these rappers disrespecting these Black children,” one person wrote, while another said, “DaBaby and Meek Mill – not helping kids trying to make money selling stuff on the street.”

Between DaBaby & Meek Mill .. I am tired of these rappers disrespecting these black children pic.twitter.com/Ic81FoQcXU

Still, there some people who supported DaBaby and thought the candy peddlers deserved the lesson, including Guapdad 4000 who said, “I actually agree with Dababy for doing them kids like that. They should have been better liars if anything + they had a horrible finesse game.”

I actually agree with Dababy for doing them kids like that. They should have been better liars if anything + they had a horrible finesse game.

Meanwhile, BNC News reporter Mike Hill said, “This is a lesson learned!! They thought they could get over. Now they just need to get over it.”

Some people aren’t surprised people are standing in DaBaby’s corner though, with one person saying, “Not shocked that people are defending DaBaby. People dream of attaining excess wealth just so they can shit on others. They want their chance at being a rich dickhead.”

Check out some of the various responses below.

DaBaby was using those kids for content,
but the kids couldn’t use him for the coin.
Interesting.

So yall mad at DaBaby for saying “here’s $4 instead of whateva i was gonna give you in the first place , because yall tried to finesse me” 🧐 its sounds like a lesson being taught . Yall trippin pic.twitter.com/psTre2w1gA

People mad at the DaBaby because he didn’t reward a clear attempt of lying and finessing?? Y’all soft pic.twitter.com/H94fSSyYiB

Dababy: How much you want for that bag of hot fries

I’ve seen no less than 20 people say that DaBaby was teaching those kids a valuable lesson. I’m trying to figure out the lesson he was teaching.

I would’ve tried to scam dababy ass too.💀 pic.twitter.com/MadSxaV1UR

i hate dababy. this is a dababy hate page.

Ion like Dababy but $200 for a box of candy kinda high pic.twitter.com/ZgohIx3MGT

niggas was like this the moment he started doing the math pic.twitter.com/UBPrXr2ShZ

& the crazy thing about DaBaby is that he would pay $4 for them damn skittles at a club, sporting event, etc. and wouldn’t bat an eyelash.