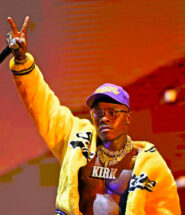 The year of DaBaby continues.

After topping the charts for seven weeks with “Rockstar,” the North Carolina rapper made his VMA debut during Sunday’s show. Baby took the stage for a CGI-heavy medley of hits, starting with his latest single “Peep Hole” off the deluxe edition of his album Blame It on Baby. Joined by the Jabbawockeez, he showed off his moves before going into “Blind” while handcuffed in the back of a cop car.

Wearing a yellow Supreme jacket and Lakers hat, a shirtless Baby capped off the performance with his biggest hit yet, “Rockstar.” Standing on top of the cop car, he continued as the city erupted in flames for the apocalyptic finale.

Baby, who was nominated for three awards at Sunday’s show, can be heard alongside Post Malone and Jack Harlow on the remix to Saweetie’s “Tap In.”