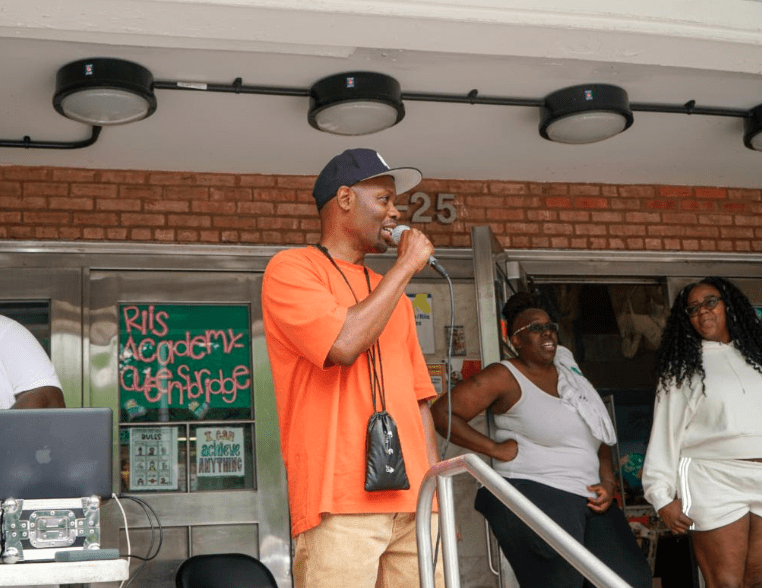 t’s been a quite week for hip-hop emcee and author Cormega, who dropped a new single, “Essential,” produced by Havoc. In addition to formally announcing the release of his long-anticipated next album, The Realness II, he unveiled a billboard in Times Square! New music isn’t the only thing he’s preparing for. The proud parent of two is also getting Queensbridge kids and their families ready to return to school!

On Sunday, August 21st from 1pm-3pm, Cormega partnered with Adidas to distribute FREE Adidas book bags to hundreds of kids in front of The Jacob A. Riis Neighborhood Settlement aka Queensbridge Community Center at 10-25 41st Ave, Queens, NY 11101. For the past four years, Cormega has discretely given backpacks and school supplies to kids in the community. This year he welcomed families publicly sharing, “I came to Queensbridge as Cory, and Queensbridge made me Cormega!”GB NY Sneaker Boutique and Riis Settlement Center, joined as sponsors of the FREE family friendly event which featured free vegan pizza from Krave It NY Pizza, ice cream, and of course music!

Cormega has been giving back to Queensbridge Projects long before he recorded his first record. Hiphopdx.com wrote an exclusive story in 2002 about an all-expense trip which took several busloads of people to Six Flags Great Adventures Amusement Park in New Jersey.

“I usually sponsor basketball tournaments, but I wanted to do something more to impact families, especially during inflation. For three years, I have purchased whatever was available, book bags, school supplies, clothes and and gave them to kids in Queensbridge. Some kids got book bags with flowers and stars. This year we upgraded to Adidas bookbags! It was cool to partner with a brand the kids and their parents respect,” shares Cormega. “I’m grateful to everyone – Adidas, GBNY, Riis, Krave It, the ice cream man – who joined in to help get the kids ready as they return back to school!”