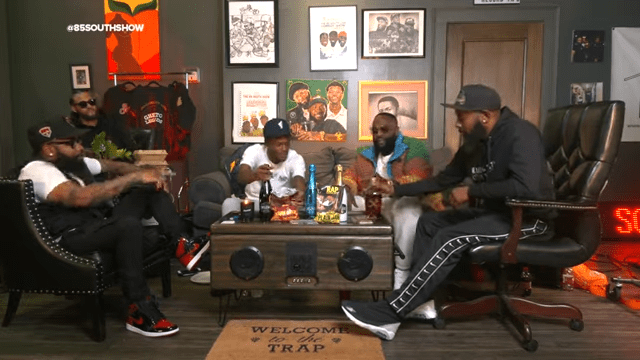 A few weeks ago, Rick Ross made headlines when he abruptly left the 85 South Show after saying he had to go use the restroom. The hosts were told that he had to catch a flight, but soon found out that was a lie.

“We ain’t get no dap?!” DC YoungFly said. “How he just gon’ disappear on a n-gga like that? We ain’t even say bye or nothing!”

However, Comedian Corey Holcomb has his own thoughts on why Ross departed from the show. Holcomb was featured on Darlene Ortiz’s D’s Loose Talk About Bullshit show and the topic of Ross’ departure became a topic of conversation. Holcomb believes Ross left when he found out none of the 85 South Show hosts were gay.

“That boy showed up at the 85 South Show and realized ain’t none of these n-ggas gay. I’m leavin … he was around all heterosexual n-ggas. Don’t nobody say that. N-gga, we know what it is. Y’all muthafuckas get mad at me. N-gga, let me tell you something. If Rick Ross watching this, let me tell you something — stop hiring drivers. Drivers always tell on ya, n-gga. I know what happened at LAX with that boy.”

Ortiz then chimed in, saying “That’s not the thought of everybody on this show.”

However, this is not the first time Ross has faced gay rumors. A part of his ongoing beef with 50 Cent, the Get Rich or Die Tryin’ artist claimed in a now-deleted 2014 IG post that Diddy, Ross, and music exec. Steve Stout were involved in a ménage à trois. “I ain’t saying nothing, but something ain’t right. Lmao,” 50 captioned the pic.

Ross had responded to the post in an interview with The Morning Show, saying “I feel like this culture is a stadium and if we was in the stadium, I point up at the scoreboard. We winning. We winning. I ain’t got time for that. We winning. “