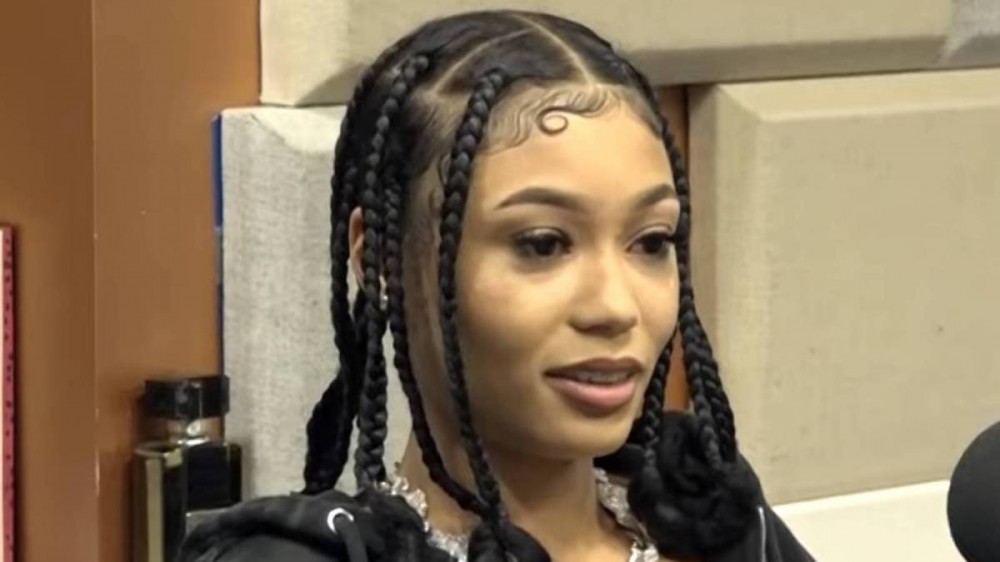 New York, NY – Coi Leray sat down with The Breakfast Club on Wednesday (April 6) to discuss her forthcoming debut album Trendsetter. During the conversation, the 24-year-old rapper found herself in a sparring match with co-host Charlamagne Tha God as they discussed Pusha T’s relevancy and other “older” MCs after he blatantly told her, “I’m 43. I don’t think your music is for me.”

The comment obviously took her by surprise and she asked him what he listened to, to which he replied, “Who am I listening to right now? I’m actually bumping the new Pusha T that hasn’t come out.”

“Pusha T… OK,” she responded. “It’s a little dark. I like Pusha T, but my cover is bright and colorful. You look at Pusha T’s, it’s black and white and dark. So if that’s the type of time you want to be on, you might need to tap in with a Trendsetter and listen to it and get some spark in your life.

“No disrespect. I love y’all but I call ’em dinosaurs. When you actually look at the history of a dinosaur, they have so many great things about them, right?… but there so distinct [sic] and so not here anymore and you have to really dig deep to find a fossil.”

Charlamagne Tha God quickly interjected and reminded Leray Pusha T has a new project on the way and just dropped a single with JAY-Z as well as Kanye West.

“But he’s got a new album coming out and he’s still fresh,” he countered. “You should hope to have that kind of longevity,” to which Leray replied, “I think Pusha T is fire and I think he’s dope but at the same time, I’m not listening to Pusha T. You don’t play Pusha T on the radio. Why don’t you play what you listen to?” That’s where Charlamagne corrected her and confirmed Pusha T is in rotation at Power 105.

In an effort to back out of the hole she so clearly fell in, Coi Leray proposed a collaboration with Pusha T, saying, “Pusha T, don’t hate me ’cause I love you, but he’s stuck on you, Pusha T. And now, I’m gonna come collab with you and we’re going to go crazy.”

Coi Leray’s Trendsetter album is expected to drop on Friday (April 8) with collaborations from Nicki Minaj, Lil Durk, Pooh Shiesty, Chief Keef, Polo G, NAV, H.E.R., G Herbo and A Boogie Wit Da Hoodie, among others. Until then, watch the full interview above. The Pusha T discussion begins around the 17-minute mark.