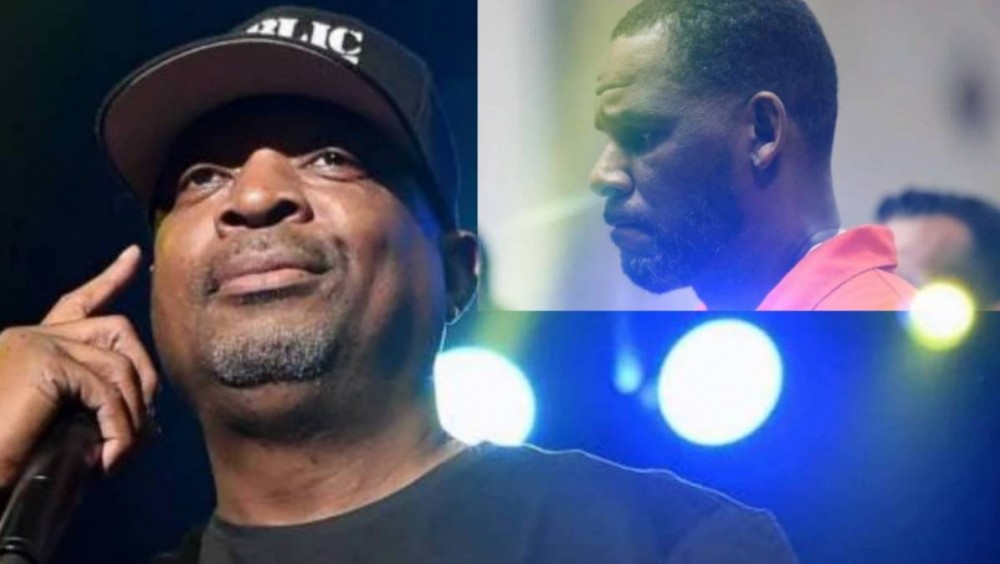 The R. Kelly guilty verdict has offered up a lot of opinions — and Public Enemy’s Chuck D’s commentary has risen to the top of Twitter.

On Tuesday (September 28), the Public Enemy frontman put himself in scrutiny’s way when he raised questions about the disgraced singer that didn’t outright crucify his character.

“Abused in his youth… an addict as a adult… Ike Turner served 18 months in prison.. Rick James did similar time,” Chuck D tweeted. “Ike came out a changed positive human being. How long should R Kelly spend in prison -and does a USA system give a man a chance for a man to change his world around?”

Given Chuck D and Public Enemy have been purveyors of social justice — on and off the rap microphone for the better part of 40 years, many fans were taken aback by the 61-year-old’s stance, to which he assured his 687,000 Twitter followers, “Its not a sympathetic question at all. Not the least.”

Its not a sympathetic question at all . Not the least.

The aforementioned musical legends Chuck D mentioned did indeed serve prison time for their drug-induced crimes. In 1989, Ike Turner, the former husband and infamous abuser to singer Tina Turner, was sentenced to four years (eventually serving 18 months) for cocaine possession and “Mary Jane” singer Rick James sentenced to three years in prison for the kidnap-torture of two women during a crack cocaine-induced rager.

When his take was challenged, Chuck D further detailed why R. Kelly’s current plight was problematic — by using the music industry culture as a whole for deeper examples (according to his perspective).

“Twitter is cryptic where was people when every other song was revealing evidence of what was ok to program to black kids over radio?” Chuck D offered in rebuttal. “All you gotta do is read the titles the past 25 years of black songs and you get clues. His labels & radio knew what they was feeding.”

He continued, “Mixing grown folk lifestyle with black youth was so endorsed financed perpetuated as so urban cool by radio. Black audiences were abused while 25yrs poppin champagne in the sandbox. The boundaries were sloppy w head nods. That dude & others gave clues that the gatekeepers ignored.”

Twitter is cryptic where was people when every other song was revealing evidence of what was ok to program to black kids over radio? All you gotta do is read the titles the past 25 years of black songs and you get clues. His labels & radio knew what they was feeding.

Mixing grown folk lifestyle with black youth was so endorsed financed perpetuated as so urban cool by radio. Black audiences were abused while 25yrs poppin champagne in the sandbox. The boundaries were sloppy w head nods. That dude & others gave clues that the gatekeepers ignored https://t.co/yGWrfHW2Cg

In spite of his serial predator status, R. Kelly is widely known as the “King of R&B.” With over 75 million records sold, three Grammy Awards and numerous hit songwriting credits from the likes of Michael Jackson, JAY-Z, Nas, The Notorious B.I.G. (and that was just a sliver of the ’90s), his track record was able to blossom in the face of numerous sexual abuse allegations involving minors during the course of his career.

On Monday (September 27), the 54-year-old singer was found guilty on charges of sexual exploitation of a child, bribery, racketeering and sex trafficking involving five victims. Late R&B icon Aaliyah’s illegal tryst was also used to carve out a pattern of predatory behavior. After tweeting exchanges for several hours, Chuck D reverted back to his original line of questioning regarding the intended prison sentence.

“I’m stunned how this took this long and how the business machines around him are unidentifiable and they also perpetuated the fanaticism of what he was,” Chuck D continued. “And masses hung on as the radio & BET played on. With support non stop. Allowing it to grow bigger.

“Answer is simple when you answer how long . If it’s 100 years then it’s the answer. If it’s execution or castration that’s a answer. I have deeper beef to all of the industry that fed this ‘aura’ to the 12-19 audiences targeted for 25 yrs as simply Urban but it’s another story.”

Undeterred by his series of tweets, the Public Enemy rapper still faced his fair share of critiques come Tuesday evening. Check some of them out below.

Chuck D jumped out the window with that one. Starting a convo about proper punishment or rehabilitation in the justice system with R. Kelly as the point of a reference is a nah bruh. 🤦🏾‍♂️

Delete this. He’s an unrepentant predator. Do you give a single shit about his victims? God this is such a horrible embarrassing thing to tweet.

I keep telling y'all to stop putting faith into these dusty rappers. Public Enemy was such a powerful voice in my 20s. For Favor Flav to end up a caricature and Chuck D to be an R Kelly apologist is just really sad.

Why is Chuck D deciding to die on Mt. R. Kelly? That’s like taking a sword to the chest on Kenneth Petty Hill. Sh*ts disgusting.

Chuck D using R. Kelly as his case study for the prison system not working and how giving him less time may be best so he has a chance to change after 30 years of predatory behavior that is NOT the fucking move 🤦🏾‍♂️🤦🏾‍♂️

HATE this from Chuck D. First of all R Kelly already had a second chance when he miraculously beat his original charges. What did he do? He got even more brazen and amassed even more victims. He is right where he needs to be . https://t.co/LF7z61T0rR

best I can see, Chuck D is trying to suggest that because radio and the music industry at large pushed lascivious content onto young impressionable fans, somehow R Kelly should be held at least somewhat less responsible for his crimes … all due respect OG that is not it.

Chuck D more worried about how long R. Kelly has to be jailed instead of how he can support Kelly's victims. 🙄🖕 https://t.co/MkZcqJpimc