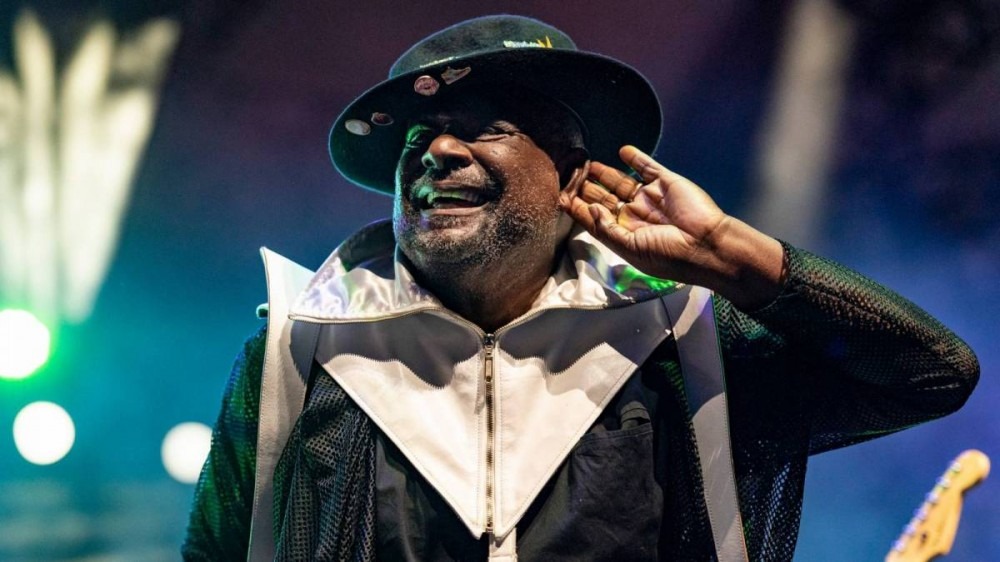 Plainfield, NJ – There are a handful of musical icons who’ve forever changed the landscape of music — and George Clinton is one of them. Often referred to as the “Chief Architect of Funk,” Clinton is the founder of the ’70s funk outfit Parliament-Funkadelic as well as a hero to multiple West Coast Hip Hop legends.

On Thursday (March 17), Clinton was given a warm homecoming as he returned to his New Jersey roots. Born in North Carolina but raised in Plainfield, the 80-year-old funk doc was on site for the unveiling of Parliament-Funkadelic Way, an homage to his impactful career. The street is located five blocks off Plainfield Avenue in Plainfield where he spent his formative years.

Clinton shared several photos from his trip to both Newark and Plainfield, which included a stop at his old elementary school.

“Today was an overwhelming experience of joy!” he wrote in the caption, “Thank you Newark and Plainfield for giving P-Funk the warmest…funkiest welcome EVER. From the kiddies of my old elementary school (Avon Elementary) carrying the funk to the city of Plainfield marking Parliament Funkadelic way. Thank you P Funk family and friends!”

George Clinton’s influence on Hip Hop is immortalized on albums such as Dr. Dre’s The Chronic and 2Pac’s All Eyez On Me. In addition to ’70s soul legend James Brown, Clinton and his various iterations of Parliament-Funkadelic are among the most sampled artists in music history.

The Chronic, specifically, borrowed heavily from several songs that fall under the P-Funk umbrella, including  “Atomic Dog” and “Adolescent Funk.” One of the most blatant samples appears on “Let Me Ride,” which finds Dre, Snoop Dogg, Jewell and RC practically rapping over “Mothership Connection (Star Child)” from Parliament’s 1975 album Mothership Connection.

Bootsy Collins, Clinton’s longtime bassist and friend, spoke to HipHopDX in November 2020 about the project and credited Dr. Dre for sparking the G-Funk movement in the 1990s.

“I’ll tell you who I think really commanded G-funk as a source and a force of its own — Dr. Dre and Snoop with The Chronic,” Bootsy said. “That’s where the foundation of G-Funk started. They did an excellent job of it.”

Bootsy plans to collaborate with Dre in the future and almost got him on his latest album The Power of the One alongside Snoop Dogg.

“Me and Dre, we were really talking about doing some stuff,” Bootsy explained. “He did a few drops from me with this party we just had. We talked about it. We were cracking up about different things. He’s was supposed to do some stuff with me on this album, but the COVID thing hit and we didn’t get a chance to get to it, but it’s coming. It’s coming. You were talking about the G-Funk thing. We were getting ready to really hook it up, you know?”

When “Let Me Ride” was brought into the conversation, he concurred it’s one of the standouts on The Chronic and even compared Snoop and Dre to himself and Clinton.

“I must agree,” he said. “I had been knowing Snoop much longer than Dre. I met him, but I hadn’t really done anything with him like I had with Snoop. They remind me of us — George is kind of the Dre and Snoop is kind of like the me.”

In a 2018 interview with HipHopDX, Clinton talked about Childish Gambino using his music as inspiration for the funk-heavy album Awaken! My Love, which arrived in 2016.

“Childish Gambino’s hit record ‘Redbone’ is one of our songs,” he explained. “They used Bootsy’s ‘I’d Rather Be With You’ as their blueprint. They said they went in the studio with Parliament-Funkadelic records and made their music. They got my stamp of approval.”