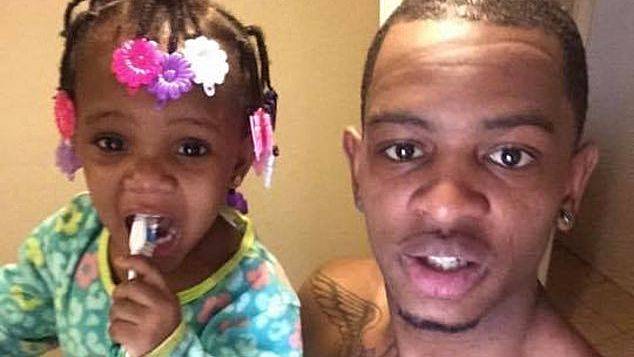 Chicago, IL – A Chicago rapper named Jontae Adams — who’s part of the duo Tilla & Bully Bino — is reportedly feeling the repercussions of his alleged gang lifestyle. According to the Associated Press, the 29-year-old Adams was the intended target of a shooting at a local McDonald’s drive-thru but instead, the suspects wound up fatally shooting his 7-year-old daughter Jaslyn.

Witnesses at the scene say a vehicle pulled up to Adams’ grey Infinity, two men hopped out and started obliterating the car with bullets. Six bullets struck the little girl while another hit Adams in the stomach. Both were rushed to John Stroger Hospital, but Jaslyn didn’t survive.

In a video posted on the End Of Sentence YouTube channel, the host claims Adams (also known as Richway Tilla) was affiliated with the Vice Lords from 600 block of Ridgeway Avenue on Chicago’s South Side. Court records stated Adams was arrested in 2012 and twice in 2013 on suspicion of manufacturing and dealing heroin. The day before Jaslyn was killed, he tweeted, “Opps probably downstairs waiting on me,” indicating he likely knew was being hunted.

In another YouTube video, Adams and Bino are allegedly seen pissing and literally defecating on his opps’ graves, possibly fueling the flames that led to Jaslyn’s death.

Following Jaslyn’s death, Adams defended his parenting on a Facebook post, writing, “I never did anything but show her how a man suppose to a woman. Anything she ask she basically get, I don’t give a fuck what y’all think because y’all ignorant. I taught her how to use bathroom, brush teeth all that — nothing but smiles when we together I know my mistakes I made out here, but I already blame myself so y’all tryna do it not gone work.”

Family members said Jaslyn was a student at Cameron Elementary School and her nickname was Pinky “because she was bright” and pink was her favorite color.

No suspects have been taken into custody and the investigation is ongoing. Adams, who was shot in the torso, is expected to make a full recovery.