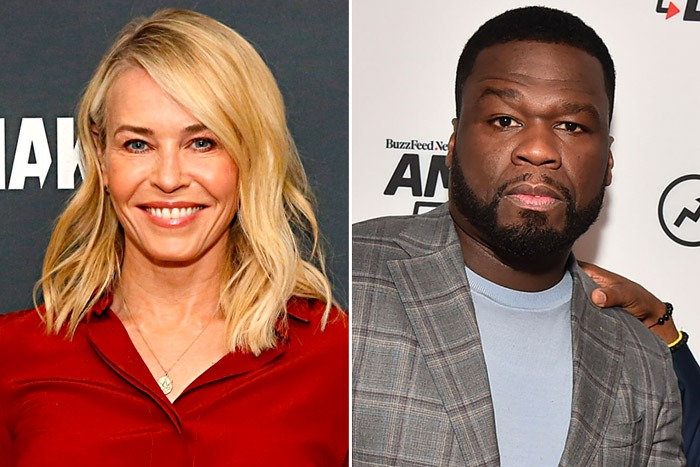 Chelsea Handler is calling out her ex-boyfriend 50 Cent over his endorsement of Donald Trump.

Earlier in the week, the rapper told his Instagram followers to vote for Trump in the presidential election, citing tax rates per state under Democratic candidate Joe Biden’s proposed tax plan.

“WHAT THE FUCK! (VOTE ForTRUMP) IM OUT, F**K NEW YORK The KNICKS never win anyway,” he wrote. “I don’t care Trump doesn’t like black people 62% are you out of ya fu**ing mind.”

Following his comments, he faced backlash on social media from people including Handler, who briefly dated 50 in 2010 after he was a guest on her E! talk show “Chelsea Lately.” “You used to be my favorite ex-boyfriend,” she tweeted.

50 responded after seeing his ex’s tweet. “oh my God this is effecting my love life now,” he said. “@chelseahandler I love ya Gator, don’t let Trump and Joe Biden come between us girl.”

Hey fucker! I will pay your taxes in exchange for you coming to your senses. Happily! Black lives matter. That’s you, fucker! Remember? https://t.co/uQsu7DHrRQ

She followed it up with another tweet in which she offered to pay 50’s taxes if he reconsidered his support for Trump.

“Hey fu**er! I will pay your taxes in exchange for you coming to your senses. Happily!” tweeted Handler. “Black lives matter. That’s you, fu**er! Remember?”

The comedian also called out 50 during a screening for her HBO Max special “Chelsea Handler: Evolution” in L.A. “I want you to forgive me for my loving reference to 50 Cent in this special,” she told the crowd at the drive-in event. “This was before he came out as a Trump supporter. So I have since distanced myself from him socially and emotionally.”

50 hasn’t always been a Trump supporter. During a 2019 appearance on “The Late Late Show with James Corden,” he claimed he was offered $500,000 to attend Trump’s presidential inauguration. “I didn’t do it because I didn’t know if I could fix the damage,” he said at the time. “… Don’t bring me to fix the African American vote, pick somebody else.”