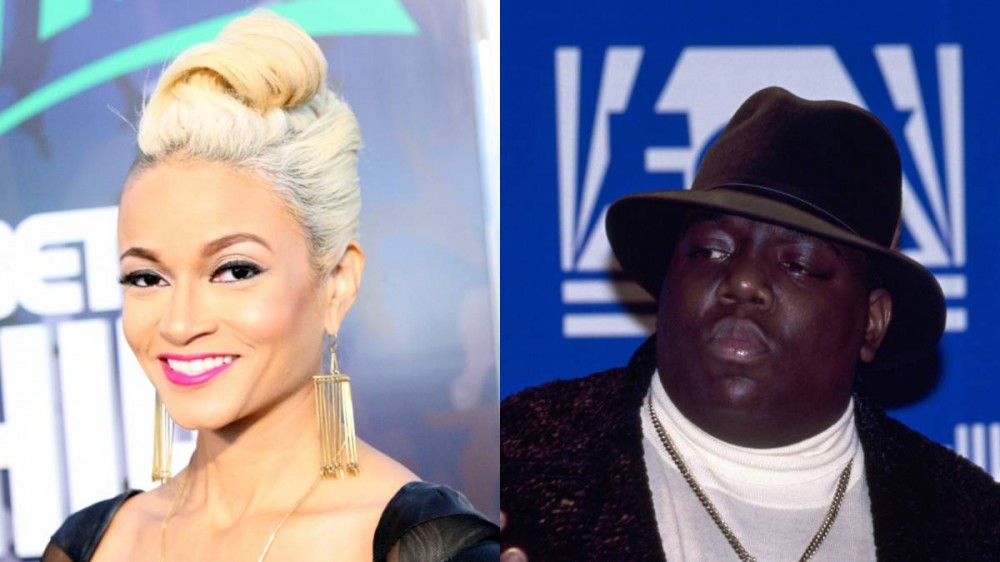 Charli Baltimore, who for a time dated The Notorious B.I.G., said she once wrote a rap about the time she caught the legendary rapper cheating on her.

“I met Big at a show in Philly and we were just friends in the beginning and kinda developed into a relationship,” the rapper recalled. “I had broke into his phone and somehow got his password to his phone.

“It was like, all these like, random girls on there saying all this stuff. So, I wrote every girl’s name down that I had from the voicemail and made like, a whole rap including all their names and shit.”

She continued: “By the time I spit it, I was laughing and so was he. He was like, ‘Yo, you’re fucking crazy.” In his mind, he thought you really got some talent and you should really keep trying to write a rhyme every day, and let’s see what comes of it.

“His vision was to start a group called The Commission, unfortunately due to his death we weren’t able to do that, but his partner at the time kinda picked up where he left off and signed me to my first deal.”

From there, Charli would go on to have some moderate success with her songs “Money” and “Stand Up” before signing to Irv Gotti’s Murder Inc. label in 2002.

She featured on Ja Rule’s “Down Ass Bitch,” Ashanti’s “Rain On Me” remix and more. She then earned a Grammy nomination in 2003 for her single “Diary” before parting ways with Irv in 2004.

Irv Gotti’s BET docu-series has had a lot of memorable moments but has partially been overshadowed by an unsavory appearance the label head made on Drink Champs, where he recounted his brief love affair with Ashanti in visceral detail, even telling DJ EFN and N.O.R.E. that her hit song “Happy” was created right after they had sex.

Irv’s inebriated time on the podcast spurred some backlash from both the public and fellow rap affiliates like Fat Joe, and the 52-year-old recently told a reporter he’s done talking about his former flame.

“Here’s what I’m going to say,” Irv Gotti told a reporter who brought up Ashanti. “I wish Ashanti nothing but the best. I’m not hooked on her, like ‘I can’t get over her.’ It’s none of that shit.

“I got paid to do a documentary on my life and on Murder Inc. If I didn’t talk about Ashanti, you would have been like what kind of bullshit is this that he didn’t speak about her. She’s too important to Murder Inc. and his life. They tried to #MeToo me. You know what the fuck they said. Stop it Shade Room. You the shadiest ones.”