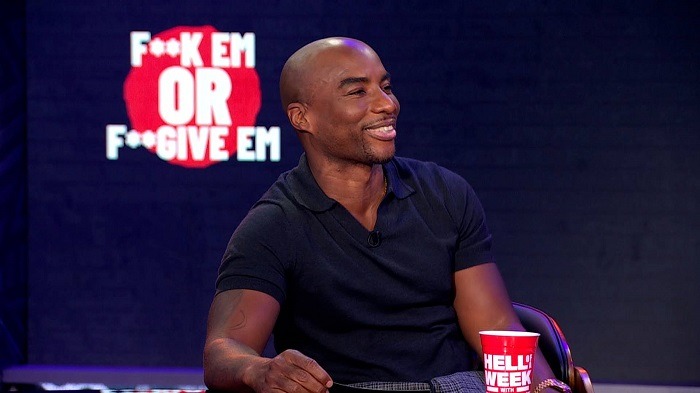 Charlamagne Tha God has returned to Comedy Central for the second season of his late-night show. After a successful run as Tha God’s Honest Truth, Charlamagne’s show will return in a new presentation under the name Hell of a Week.

The series will have more of a panel, and in the first episode, Charlamagne was joined by Andrew Shulz, Kenan Thompson, Coleman Hughes, and Lis Smith. Ahead of the show’s launch, Charlamagne Tha God spoke with The SOURCE about changes fans will see in the show’s second season.

The SOURCE: We are hitting season two of your late-night show, but we have a name change. What sparked the transition from The God’s Honest Truth to Hell of a Week?

Charlamagne Tha God: Well, you know, the beauty of the business that we’re in is it’s always constant research being done, you know? We found out that The God’s Honest Truth didn’t necessarily read like a talk show. If you didn’t necessarily know who I was and knew to play on the words, you wouldn’t get that. The God’s Honest Truth, you know, that is my truth. And that is how I feel about things. But Hell of a Week, not only does it read like a weekly talk show, but it feels like something everybody can relate to. Cause you, you probably said that last week, “boy, it was a hell of a week.” So it’s just something that I feel like more people can embrace.

Was there a level of attachment with that name change for you? You take projects as your baby, and then for that to be your late-night intro, was there any battling inside your mind, wondering if this is the right move for you to do even though it makes more sense in a data-driven process?

Always. That’s just natural. Especially when you come up with something, you wonder, am I not good? Was that not good enough? So yes, you always do, but you know, you just gotta realize that things are bigger than you, and you gotta take a step back from yourself and realize that’s why they hire the people they hire to do this research. The first season we had success, which is why we’re getting a second season, but I want a hit show, like a hit hit show. An undeniable hit show. I want to show that people are watching. I want to show that it’s getting the right messaging out there. I want to show that people are entertained and educated by the first season, but now we’ve worked out these one or two kinks here and there. I think we will hit the ground running with season two and make more of a splash than in season one.

This title change also comes with a new format. Listening to Brilliant Idiots, I get a small understanding of what to expect in this transition, but what will fans see in this season?

What I tried to do in the first season was a lot of heavy lifting, man. I was communicating these big broad topics like critical race theory. I was delivering them, but it was through the lens of me. I think this new show is about community, which is what I like to do. When you hear me on The Breakfast Club, it’s me, Envy, and Angela. And it’s us with the guests. You hear me on Brilliant Idiots, and it’s me and Andrew Shulz. I feel like that’s where I’m my best, when I’m, sitting around kicking it with people who can elevate whatever conversation that we’re having. Andrew’s actually on the first episode. I told him, “I need you to shoot.” Because of two things, number one, everybody knows how critical Andrew’s been about Comedy Central, and number two, I want Andrew to be Andrew. I don’t want anybody to feel like we’ve all come too far to be feeling restricted by any platform. I know that’s one reason why a lot of people don’t even like to do these kinds of shows anymore. People would rather have their social media, go on their stage, or podcast so they can express themselves unapologetically. I want everybody on the show to feel comfortable enough to let it fly.

Using Andrew as an example, coming into this with someone who may not have the best history with Comedy Central, and that’s your partner. How do you make sure you create the synergy for those shows to be created with possibly two contrasting entities?

I don’t think it’s a conversation to be had because I don’t even know if Comedy Central has heard what Andrew said [laughs]. I know what Andrew has said, but guess what? A lot of the criticism probably was fair. It wasn’t like just OD slander for no reason. It was fair criticism from a comedian’s perspective, and comedians grew up on Comedy Central. We grew up on Comedy Central, with certain things like I watched Chappelle’s Show. I watched Key and Peele here and there. I love The Daily Show with Jon Stewart, but there’s a certain thing we expect from Comedy Central, and I guess a lot of comedians felt like, at some point, that thing wasn’t there. I hope to be a part of the individuals helping to bring that thing back. And I think that thing is just a little old fashion comedy, good old fashion observations of the world. I’m not a comedian per se, but I’m pretty good at making observations of the world.

I’m glad you mentioned that because a lot of comedians have to be able to catch something on the fly, be able to move around, and make a joke out of thin air. You mentioned having to be ready to shoot, but for you coming into this, especially with a new format, how do you like mentally prepare for the show?

I’m mentally preparing by being more loose. I think I put too much pressure on myself in the first season. I put too much pressure on myself like I haven’t been doing this for 20-plus years. I put pressure on myself because even though I’ve had talk shows in Charlamagne and Friends and Uncommon Sense, that did well for MTV2. When I look at those platforms, I was really training for a big opportunity like this, and that’s what literally what it was like. God blessed me with those other two opportunities to put me in a position to have an opportunity like this. When you have your name on the show, I didn’t feel that pressure with uncommon sense. And maybe cause I was just younger and didn’t have as many responsibilities as I have now. It was just fun.

We had Desus and Mero on Uncommon Sense. They had a segment on my show called Classic or Trash. I had somebody like Zuri Hall who is now on American Ninja Warrior. I had Karlous Miller, Chico Beam, and DC Young Fly. I remember Viacom told me nobody understands DC Young Fly, and now they can’t get enough of him. We had Cardi B on that show early on. It felt looser, so I didn’t have the pressure. The first season of this show felt like a lot of pressure because I wanted this to be successful. Still, I’m approaching this season much looser because if it’s one thing, God has consistently shown me everything is going to be okay and everything works out the way it’s supposed to.

Have you ever thought about yourself as the Gucci Mane of finding comedic talent? You know he finds everybody and the names you just named are big.

[Laughs] That’s a Black reference. That’s a reference only Black people from a particular club get. You know, I’ve never thought of that, but no. I know what you mean cause Gucci, I respect him for that. I respect anybody who does that because coming up, man, I always heard these stories of people that were selfish and didn’t want to share the stage. Didn’t wanna share the spotlight, didn’t want to share that platform. The people that I always thought were super dope were the people who had their stars and poured into everybody. My four inspirations in entertainment are Petey Greene; God bless the dead, an amazing radio personality. Arsenio Hall, Jay-Z and Clarence Avant.

Petey was just a servant of the people like he was. If you ever watched the movie Talk to Me with Don Cheadle and Taraji P Henson, Don Cheadle plays Petey Greene. He was just a servant of the people. That was his thing. He opened his platform to the community. He opened his platform to the people so much that when the riots broke out after the assassination of Dr. Martin Luther King Jr., they had to put him on air cause he was the only one who could talk to the community then. Arsenio Hall, if you ever watch his old, late-night talk show, man, there’s nobody that puts more Black creatives on television. The first time you saw the cast of Living Single or Wu-Tang as a collective was there. They weren’t getting those looks on the shows that were on NBC and anybody else at the time.

JAY-Z, I think his track record speaks for itself. Look at all the different people that he had poured into. And Clarence Avant is the godfather. You know, country boy from North Carolina. I’m from South Carolina. But that young man went to Hollywood and did great. If you watch The Black Godfather on Netflix, you see how he’s had his hand in everything from Hollywood to the music industry to politics. I admire people like that. I don’t know if I said this before, but if what I’m doing only serves me, it’s not big enough.

You are bringing together all types of people, professions, and more for this show to find solutions. Why do you think to this point, people have not zoned in on finding solutions, but instead, just discussing the problems?

Because the problems make for better television, Chris Rock had that joke back in the day. I think it was a joke about disease, and he was like, the money’s not in the cure, the money is in the treatment. It’s the same thing with this. It’s like if we get to the solutions, then that takes away from all the time we could spend talking about problems, and the problems cause conflict, and it causes viral moments. But man, I want to get to solutions cause the reality of the situation is there’s no problem that America has that’s going to be solved in 30 minutes on a TV show. So we will never run out of problems to try to solve. Too many questions are being asked on television instead of people making actual statements. Everybody is asking should Donald Trump go to jail for the January 6th Insurrection. I’m like, what do you mean, should he? If you’ve been watching, they already said they got more than enough to charge him. If there’s any question that should be asked, it’s what the hell is the DOJ [Department of Justice] doing? What is the DOJ waiting for in bringing charges? That should be the question.